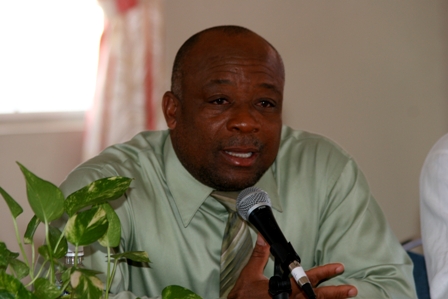 Deputy Premier and Minister of Culture in the Nevis Island Administration (NIA) Hon. Hensley Daniel, lauded the efforts of all who contributed to the success of Culturama 2K8 but expressed the need for greater participation. The Minister’s comment came when he delivered remarks at a post mortem and press conference on the island’s annual summer cultural festival Culturama 2008 which concluded on August 05, 2008. The post mortem was held on Friday August 08, 2008, at the Red Cross Building in Charlestown. “We have had a successful Culturama but I really have to say that the responsibility for ensuring that we have a quality festival, maintaining the key components that we have, rests squarely with the people of Nevis… “We have become too much a nation of spectators and Culturama invites us to increase our participation in our cultural activities. I think we have at our disposal in Nevis raw cultural talent and Culturama provided that opportunity,” he said. Mr. Daniel noted that since the NIA assumed office in July 2006, it had created avenues to enhance greater participation in Culturama. The implementation of community festivals, he explained, provided a list for Culturama so that people who participated in parish festivals could build their confidence to take part in the bigger festival. 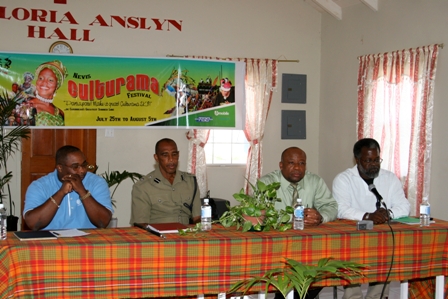 At the head table (L-R) Vice President St. Kitts and Nevis Cable and Wireless Head of Nevis Operations Mr. Jerome Rawlins, Head of the Nevis Division of the Royal St. Kitts and Nevis Police Force Superintendent Samuel Seabrookes, Deputy Premier and Minister of Culture on Nevis Hon. Hensley Daniel and Chairman of Culturama 2008 Mr. Halsted Sooty Byron “We have also created the Nevis Cultural Development Foundation with four distinct units one of which is a Festivals Unit, another is Artistic Development and the third one is Research and Documentation. “I think as we go forward for the 35th anniversary, what we are going to do, [is to] invite suggestions and participation from the public right after the celebration of Independence 25 and we are going to put together a festival so that by January, February our international visitors and participants can feel a sense of that engagement,” he said Notwithstanding, the Minister of Culture said too, there was also the need for expansion of the festival to ensure its longevity and thanked persons from St. Kitts who participated. “Culturama is distinctly Nevisian but there are only 14,000 people here so if we want to keep it going we have to internationalise it and we have to add several components to it. “In this context I want to record my appreciation to the people in St. Kitts because the people in St. Kitts came over to take advantage of two things. The opportunity to make some money (I saw bus drivers and I saw people selling food) and also the revelers came over and they could not come without the boats,” he said. The Minister also explained that there was the need to engage Nevisians who lived in the Diaspora who needed to form part of the annual festival. “Nevisians in the Diaspora in the Virgin Islands, the Dutch Antilles in the Unites States and Britain they must feel that they can be part and parcel of a festival called Culturama. We have to move, in terms of cultural development, outside of the 36 square mile physical space that we have and we are going to want to engage our Nevisian in the Diaspora throughout in all of the activities,” he said. Mr. Daniel was also of the view, that Culturama had touched everyone on Nevis and had expectations that the business community would make the proposals ahead of the 2009 festival to the Nevis Cultural Development Foundation because everybody in Nevis who sold food benefited financially during Culturama. “I think the opportunity exists for us to participate to lift cultural expression and to ensure that we make some money from Culturama. As I have said in the past Culturama has a challenge where you can be very cultural you can produce all of the height of cultural expression and on the second level we also have to do it in a way in which it is economically viable, that is the challenge,” the Culture Minister said. Mr. Daniel also took the opportunity to register his gratitude to the Police who he said had delivered a Culturama season which was crime free. “I believe we owe it to the Nevisian community to ensure that we rise above that level of behaviour which is too base and which lacks sophistication, lacks patriotism and to as the police says while people are having all concerns about crime it was the responsibility of the police to ensure that they rise above all that concern to deliver to them a festival that was crime free and a festival of which all of us can be proud. “I what to record my thanks to the police…The very presence of police prepared for any &activity suggested to the people that they could go and unwind,” he said.