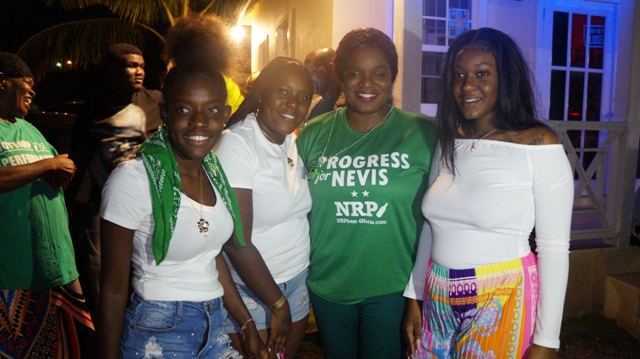 Winner of the St. Thomas’ Lowlands Nevis 5 by-election Mrs. Cleone Stapleton Simmonds of the Nevis Reformation Party celebrating her victory with family members at the party headquarters along the Island Main Road at Nelson Spring on March 05, 2020

NIA CHARLESTOWN NEVIS (March 05, 2020) — Mrs. Cleone Stapleton Simmonds of the Nevis Reformation Party (NRP) whose symbol was the bottle emerged winner in the St. Thomas’ Parish, Lowlands Nevis 5 by-election held on March 05, 2020. The results were announced by Mr. Elvin Bailey, Supervisor of Elections from the Cotton Ground Police Station where the ballots were counted 3 1/2 hours following the close of poll at 6 p.m.

Mrs. Stapleton Simmonds amassed a total of 514 votes over Mr. Keith Scarborough whose symbol was the hammer, candidate of the Concerned Citizens Movement who got a total of 191 votes.

A total of 713 persons cast their ballots which represented a 46.5 percent voter turnout.

There was a total of five polling stations – the Cotton Ground Community Centre 5(1) which was assigned a total of 585 voters. The centre was subdivided in two sections – 5(1A) with 285 votes and 5(1B) with the remaining 294 voters.

There were no spoilt ballots. There was a total of 5 rejected ballots.

There were no spoilt ballots. There was a total of 2 rejected ballots.

There were no spoilt ballots. There was one rejected ballot.