In brief remarks, Head of the Nevis Island Administration (NIA) welcomed the delegation’s visit and expressed his thoughts on the way forward for the development of the island’s renewable energy resources.

“The OAS, I think, is the way for us to go because they have the expertise. We want to utilise that expertise to ensure that we get the best in terms of how do we advance the geothermal, alternate energy resources for Nevis,” he said.

The NIA had collaborated with the OAS sometime in 2003/2004 on the matter of geothermal exploration because of the importance it had attached to that energy source based on the volcanic origins of the island. 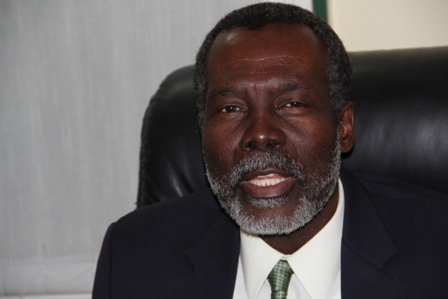 Mr. Amory stated at that time the Administration was pleased for the input of the OAS which had engaged in exploration and the identification of the sources and locations of the energy sources and their accessibility.

“So we [NIA and OAS] do have that long-standing arrangement. I want to, at this time, thank the OAS for financing the studies which were done in 2005, 2006 and now we are here again to advance those discussions, to see how we can move forward,” he said.

Meantime, Mr. Greene explained that the team had met one day earlier at a meeting in St. Kitts with a strong contingent from Nevis headed by Junior Minister in the NIA responsible for Natural Resources, Environment and Public Utilities Hon. Troy Liburd.

The Ambassador used the opportunity to give some insight into the meeting and its significance to the island of Nevis. 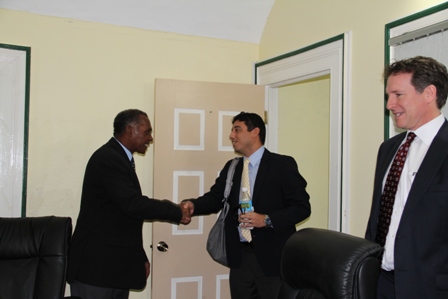 “The importance of that presentation is because of the implications and the value that that study has to the potential development of geothermal resources here on this beautiful island of Nevis,” he said.

He further stated that the team’s meeting with Premier Amory, was to brief him on the St. Kitts meeting and regarded him as a long-standing friend of the OAS in and out of office

“His support for the Organisation has been unwavering and the organisation is most appreciative of that,” he said.