NIA CHARLESTOWN NEVIS (February 25, 2013) — Top Police Constable of the St. Christopher and Nevis Police Force, Nevis Division for 2012 #601 Valentine Hodge, believes that Police Officers ought to be disciples of the  Federation  and living examples, as they went about the execution of the laws of the land.

His comment came when he delivered remarks at the 10th Police Constables Awards Ceremony and Dinner on February 23, 2013, at the Pinneys Entertainment Arcade, moments after he was named the leading Police Officer in the Division from a field of nine nominees. Constable #750 Kishorn Charles of the Criminal Investigation Department placed second and Constable #755 Derell Boon of the Gingerland Police Station placed third.

“We as Police Officers are the disciples of this Federation, for the duty was bestowed upon us not only to uphold the law but to be living examples as we execute the laws of this land,” he said.

The elated Officer listed a number of values which he said were important and would enable any officer to effectively execute their duties. Among them were dedication, integrity, service, empowerment, good character, a pleasant disposition, and spiritual guidance. 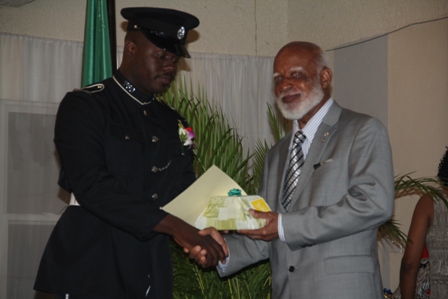 Officer Hodge also thanked his superiors namely his immediate supervisor Head of the Traffic Department Sergeant James Hazel, Divisional Officer Superintendent Hilroy Brandy and Assistant Commissioner of Police in charge of the Nevis Division Robert Liburd, who he said kept him on his toes and helped to draw from him a positive character, a quality he cherished dearly.

The Top Officer acknowledged that although was not always an easy road for Police Officers who on many occasions experienced challenging times, there was more to come but in his view, character building was an ongoing process.

The Constable also thanked the public for its support which he said spurred him and fellow officers on to want to serve the community even more. To the various churches he registered gratefulness for what he described as their prayers or “spiritual food” for the Police.

Before ending, Constable Hodge said he had saved the best for last and thanked his parents who had always been a part of his development and support system. He urged other parents to do the same for their children and encourage some to join the Police Force.

“To all the moms and dads out there, encourage your sons and daughters as you nurture them to become adults… to join this Organisation, so that one year down the road as this legacy continues, you will be here to witness not me but your child on a similar platform from maybe a podium built of crystal giving a similar speech that will end by saying thank you, thank you!” he said. 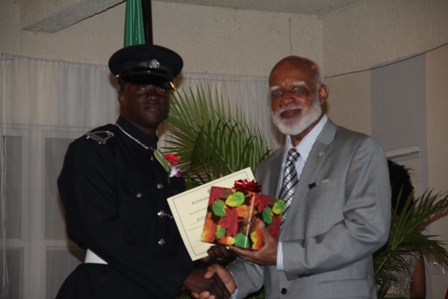 Other nominees for the Constable of the Year Award were #504 Constable Royson Isaac of the Beat and Patrol Unit, #530 Woman Constable Shauna Pemberton of the Newcastle Police Station,#648 Constable Sadiki Phipps of the Cotton Ground Police Station, #648 Constable Vernon George of the Task Force, #730 Constable Etroy Jeffers of the Immigration Department and #751 Constable Randell Harvey of Court and Process.

The event was hosted by the Division’s Strategic Planning Group which was formed 10 years ago in an effort to proactively tackle the issue of crime and violence on Nevis.