(L-R) Colleague OECS Ministers of Natural Resources Hon. Carlisle Powell congratulated by Dr. Kenneth Darroux of the Commonwealth of Dominica during a visit to the WindWatt Wind Farm at Maddens on Nevis

This time the praise came from among the member states and representatives of the Organisation of Eastern Caribbean States (OECS), at the end of a visit to the Windwatt Wind Farm at Maddens and the planned site of the first geothermal plant on Nevis at Spring Hill.

The Ministers were on Nevis to attend at the OECS Secretariat’s 14th Ministerial Environment Policy Commission Meeting on October 20th, when they had the opportunity for a first hand view of the renewable energy developments on Nevis.

Minister responsible for the Environment, Natural Resources, Physical Planning and Fisheries in the Commonwealth of Dominica Dr. Kenneth Darroux, told the Department of Information that Nevis was a shining example and there were lessons to be learnt by his island from the Nevis experience. 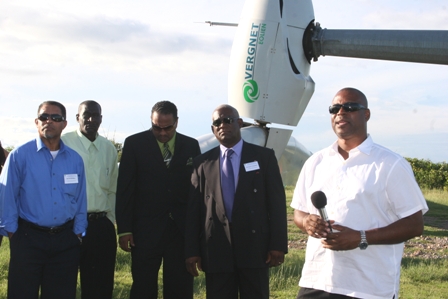 “We got the example to visit the wind farm and it is actually a success story here in Nevis. We think that we [OECS Ministers] can go back to our respective countries and try to convince our various governments and Cabinets that’s the way to go…We think that Nevis is a shining example in terms of green clean energy to the rest of the Eastern Caribbean and the wider Caribbean by extension.

“In terms of the geothermal, actually in Dominica right now is entering the stage where Nevis is at so we also think that there are lessons to be learnt from this small island of Nevis.

Montserrat Minister responsible for Agriculture, Land Housing and Environment Mr. Joseph Farrell, said he was impressed with the projects he had seen on Nevis.

“I am very impressed with the renewable energy projects on Nevis…when I visited the Wind Farm I was very impressed. I think that’s the way we have to go. When I look at the turbines and also heard of the amount of kilowatts that you can contribute through seven or eight turbines, I think that that is the way the region must go… 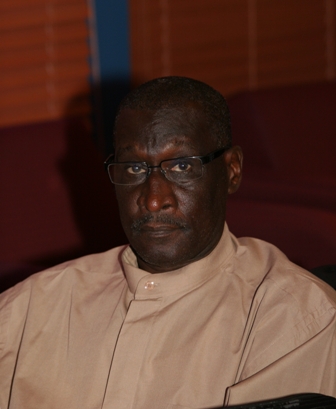 “You have gone ahead and I am not the minister responsible for energy but I am sure I will share this experience with him and I am sure that he can learn because there are some experiences to be learnt from Nevis. I am very impressed with what I saw on Nevis,” he said.

Meantime, Director of the OECS Social and Sustainable Development Unit Dr. James Fletcher added similar sentiments. He noted that Nevis had set the tone for other member states.

He viewed the visit to the renewable energy developments on Nevis as important, given the great concern of energy expressed by Ministers from the other islands. However, he explained that a decision was taken by the nine member states, to insulate the region from the shocks of oil prices.

“I think what Nevis has done is really remarkable. They have really set the tone for the rest of the OECS in really reducing our dependence on fossil fuel and that was one of the things our meeting discussed. How do we look at issues pertaining to energy efficiency? How do we look at issues pertaining to investments in renewable energy? Ensuring that there is the sort of environment that would encourage those sorts of investments so that was very important for us,” he said.

Mr. Keith Nicholls of the OECS Secretariat, said the decision to establish a Wind Farm on Nevis spoke volumes of the commitment and dedication of the NIA, to pursue the development of renewable energy initiatives and to find a way to reduce Nevis’ dependency on fossil fuels. 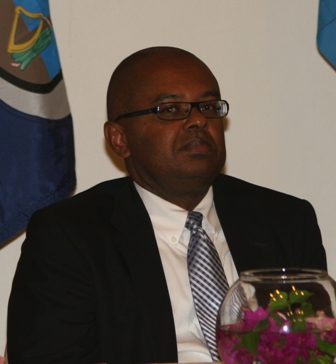 “The price of oil will keep going up…and I think the initiative on the part of the NIA to pursue this initiative is tremendous and it speaks volumes for the possibilities for the rest of us in the region.

“We were tremendously impressed and I think also the ministers and all the participants who have seen a wind farm in operation possibly for the very first time like myself… It is the second wind farm in the chain of islands there is one in Guadeloupe but for the English speaking OECS countries of the region, this is the first and I think it speaks to what is possible for the rest of us in the region,” he said.

Mr. Nicholls sais wind power and other forms of renewable energy had been a talking point in the Region for decades yet had not materialised. However with Nevis’ achievements would allow the other islands to become more optimistic about their pursuits in support of renewable energy developments. 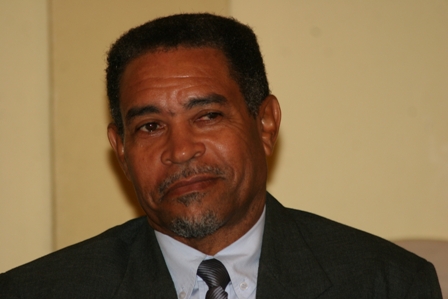 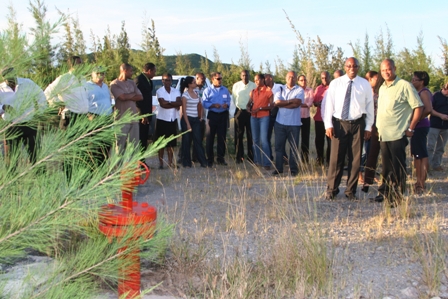 Minister responsible for Natural Resources on Nevis Hon. Carlisle Powell (second from right) accompanies colleague OECS Ministers, delegates and staff of the OECS Secretariat on a visit to the planned site of the first geothermal plant on Nevis at Spring Hill