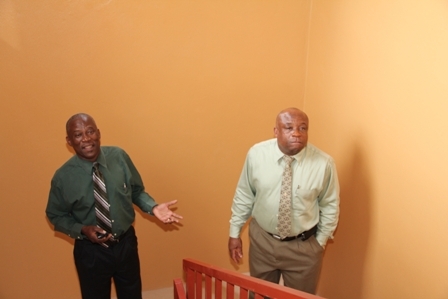 (L-R) Jessups Villager and Cabinet Secretary Mr. Ashley Farrell and Minister for Social Development in the Nevis Island Administration Hon. Hensley Daniel touring inside the Jessups Community Centre to be officially opened by month end
NIA-CHARLESTOWN NEVIS (February 14, 2012) — Members of the Nevis Island Administration(NIA) Cabinet led by Premier of Nevis and Area Representative Hon. Joseph Parry, visited the Jessups Community Centre on Monday February 13, 2012, for a firsthand look at the progress being made on the finishing touches of the history making facility.

Minister of Social Development Hon. Hensley Daniel told the Department of Information that the visit was a final check ahead of the planned official opening by the end of February.

“We are doing the final check because we really want to have the centre opened in a few days before the end of the month. Here we are checking on all the things that need to be done.

“The arrangements for this community centre were different, in that, the government provided the materials and the builder just had a labour contract. So we are here to make sure that the finishing touches are done and we expect to have those done for an opening ahead of the end of the month,” he said.

According to Mr. Daniel, the Jessups Community Centre is the last of five centres for which ground was broken in 2011 that will be opened. The first one opened was constructed in partnership with the Basic Needs Trust Fund and the NIA in the village of Barnes Ghaut. The second was the Cotton Ground Community Centre, third was the Fountain Community Centre and the Combermere Community Centre was officially opened two weeks ago. 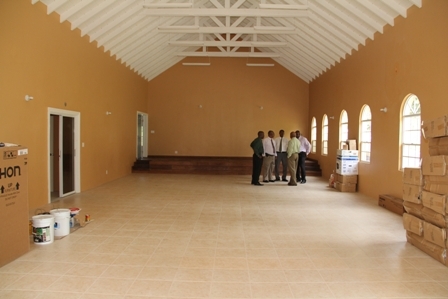 He explained that a final electrical inspection, finalising air conditioning units and some landscaping also had to be done in readiness for the official opening by the end of February.

In an earlier interview with the Department of Information, Mr. Daniel noted that the NIA had undertaken a programme to redirect the communities on Nevis and provide for them focal points in the form of community centres.

He said the Nevis Reformation Party-led NIA regarded community development as central to the stabilisation of the society, central to crime reduction, to build a sense of oneness and a sense of community.

The Minister further added that on the NRP’s return to Government, the Community Development Division was established with the task to develop programmes at the community level.

Notwithstanding, Mr Daniel also used the opportunity to pay tribute to the level of talent and skill available among Nevisians and pointed to the quality of work delivered by the local contractors who constructed the five new community centres.

“We are a government which take on board the view that the local people come first, the local people have talent and skills it is not only done in works but you should see it in deed. These centres were done by local people – Curtis Liburd at Barnes Ghaut, Rudolph Nisbett here at Jessups, Malvern Jeffers at Cotton Ground, Lesroy Hanley at Fountaine and Livingstone Mills at Combermere. 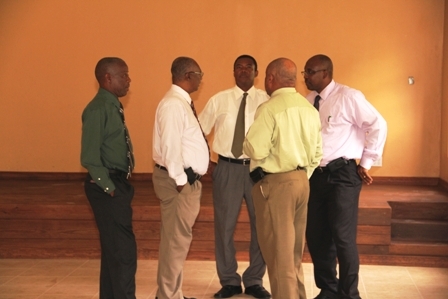 “That just underscores the point that if you give the local people the opportunity to address particular issues you must invest the confidence in them because if a a man believes instinctively his government has the confidence in him he is more likely to deliver a good quality product,” he said.

Mr. Daniel also had praise for the Public Works Department who he said had provided the designs for the centres, another achievement Nevisians should be proud of.

“The architectural work is pretty much emerging from Nevis as it were so we can all be proud that we have the designs done in Nevis and the work done in Nevis.

“That certainly gives our local people a lift and certainly could at least have the rest of the society have that kind of confidence in them,” he said.

Meantime, Jessups Resident Mr. Ashley Farrell who is also the Cabinet Secretary added his impressions of the new centre to be opened in his community.

“I am extremely pleased with the progress here at the Community centre. This is something that the villagers have been looking forward to for a very, very long time. 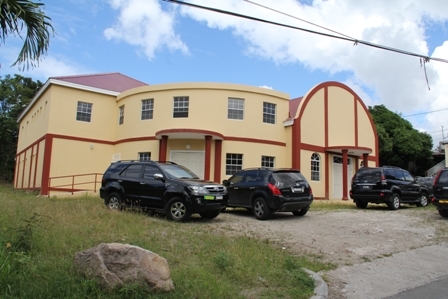 “Right now we are satisfied that the building is ready to be opened and we anticipate that before the end of the month the Jessups Community would have a  place where they can meet, have community activities, cultural activities and bring back the Jessups of yesteryear,” he said.

Mr. Farrell said his fellow villagers anticipated that the new facility, once opened, would be used by all ages and that there would be cultural and religious shows. However, he was hopeful that apart from the training programmes that would be offered there would be those that dealt with physical fitness.

The Jessups Villager, a former Permanent secretary of Education said he also also looked forward to reading programmes that would be offered and once he had time would happily get involved to ensure that the boys reading skills would be greatly improved as compared to where they were at present.

“So all in all I can say on behalf of the villagers of Jessups, thanks to the Nevis Reformation Party-led government for making a community centre in Jessups a reality,” he said.

Since the inception of the Nevis Island Administration in 1983, it would be the first time that any government erected a community centre in Jessups Village.