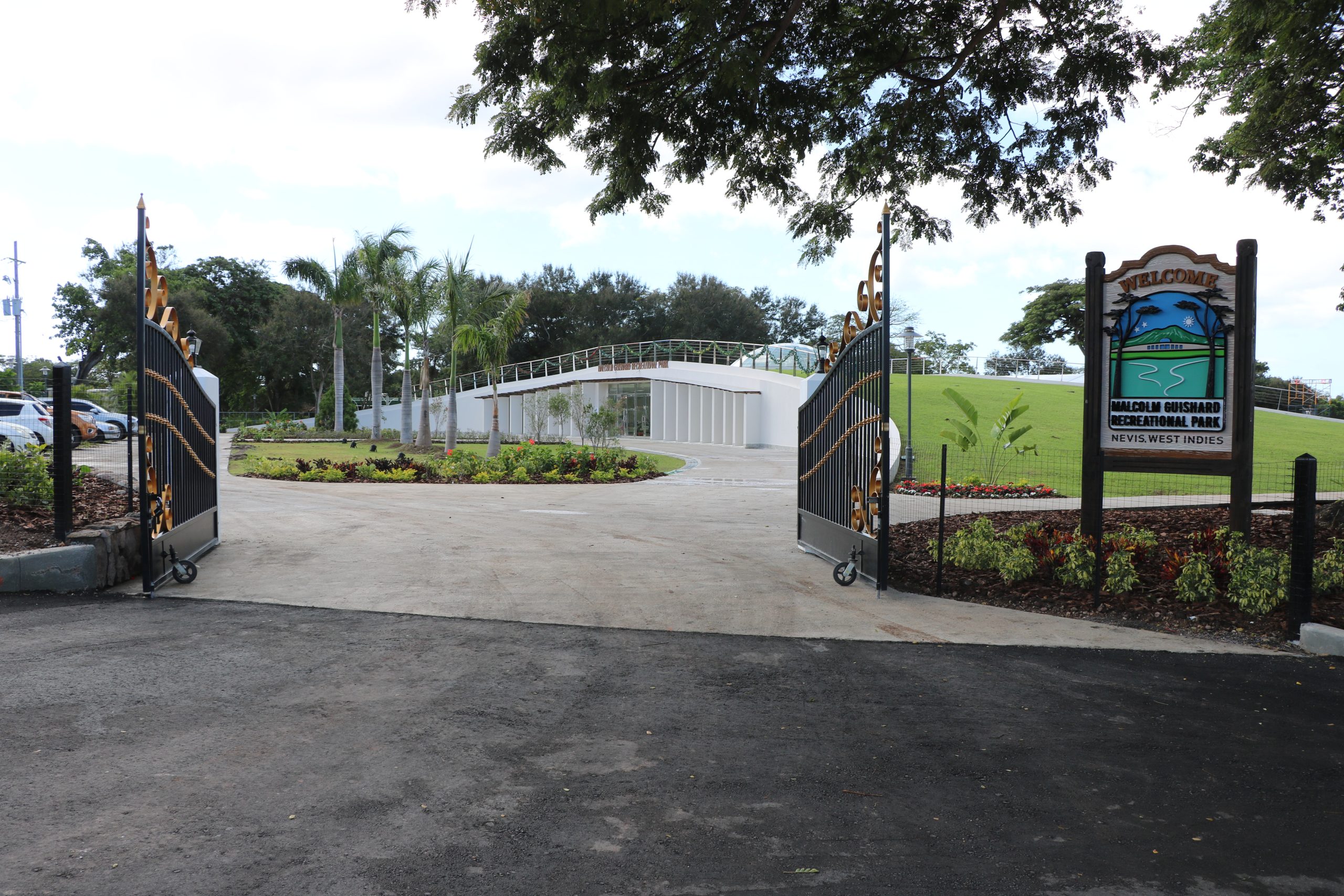 The welcome sign and entry to the Malcolm Guishard Recreational Park on December 20, 2021

NIA CHARLESTOWN NEVIS (December 20, 2021) — The legacy of Hon. Malcolm Earl Guishard affectionally known as “Guish” was memorialised, when a multi-million-dollar park at Pinney’s was officially opened and renamed in his honour, at a ceremony on December 19, 2021.

Hon. Mark Brantley, Premier of Nevis in his remarks, noted that the idea of the park was conceptualised by Mr. Guishard more than 20 years ago in the NIA where he served as the first Minister of Tourism. He was also held the position of Deputy Premier and other several other ministries.

“I say to you today that while it fell to me and my cabinet to design, fund and execute this magnificent project, the vision for a park at Pinney’s was not mine, no. That idea was born long before the start of my leadership of Nevis.

“That idea came from the vision of none other than Earl Malcolm Guishard or ‘Guish’, as he was affectionally called. He challenged us to create a brighter and better Nevis. He expended himself known to all, and while I don’t know it to be a fact, I am persuaded that even now ‘Guish’ is looking down on today’s event and smiling that broad smile that was his unique trademark,” he said.

Premier Brantley made clear Mr. Guishard’s role in laying the groundwork for the park at Pinney’s, in the cabinet led by Hon. Vance Amory, then Premier of Nevis.

“When the Pinney’s Estate was being sold, it was Malcolm Guishard who sought to keep this plot of land for all Nevisians to enjoy.  It was he who envisioned and stipulated that this site should be used as part of our tourism product.

“When he was urged by some to keep just a small portion of the land, history will record that he adamantly resisted and insisted that all of it should be in the hands of Nevisians.  Such was brother Malcolm; such was the measure of the man.

“I say to you today that without the vision and foresight of Malcolm Guishard, this magnificent park would never have been possible. His unmatched vision has brought us all here today for this historic occasion,” he said.

According to Mr. Brantley, when his cabinet decided to memorialise Mr. Guishard’s efforts in giving life to the idea of a park for the people of Nevis; when they considered that his DNA is found in every facet of the development of Nevis; when they reflected on what could be done to honour him and keep his name and legacy secure in the hearts of all of our people, they agreed to name the park in Mr. Guishard’s honour, as a lasting reminder of the one who made it all possible.

Mrs. Yvonne Guishard, Mr. Guishard’s widow who unveiled the welcome sign and her family; his siblings Mrs. Mignon Wade and Mr. Hilary “Doc” Guishard and their families were also present at the ceremony.  The premier asked them to accept the gesture with satisfaction.

“May this small gesture forever fill you and your children with pride, and may this park be an everlasting reminder of the monumental efforts of brother Malcolm on behalf of us all.

“May it inspire every boy and girl alive today and those who shall be born tomorrow, to lend their time and talents to the service of our beloved Nevis and the wider federation. May this park bring us joy. May this park bring us peace of mind. May this park inspire us. May this park forever honour the Honourable Malcolm Guishard of blessed memory. May we cherish and care for it. May it stand as a lasting testament to the power of ideas of hope, of service, of international friendship, and of national pride,” the Premier said.

The Nevis Pinney’s Beach Park Project was a collaborative effort between the NIA and the government and people of the Republic of China (Taiwan). On July 19, 2019, during an historic visit to Nevis, President Tsai Ing-wen turned the sod at Pinney’s for  construction of the park.

Hon. Michael Perkins, the NIA’s Project Manager for the Nevis Pinney’s Beach Park Project gave an overview of the project; and Resident Ambassador of the Republic of China (Taiwan) to St. Kitts and Nevis His Excellency Michael Lin  delivered remarks. The Invocation was done by Mr. Eric Maynard, Pastor Emeritus of the Shiloh Baptiste Church.