He made the comments during  a moving tribute delivered at the Funeral Service for the fallen leader at the historic St. Thomas Anglican Church on Tuesday, June 5. Daniel passed away at his home in Brazier’s on Sunday, May 27, aged 77, after ailing for some time.

“Dr. Simeon Daniel never felt that he had completed his job,” said Hon. Parry. “I am almost certain that he never fully realized the great chasm that he had crossed to bring Nevis into the modern world. A great pity, for what he did, nobody else would ever do.”

Premier Parry acknowledged that there is so much work still to be done, and implored all Nevisians to know that Dr. Daniel laid the foundation as solid as a rock, and those who know how to build, and wish to build, have a foundation of which they can be proud.

“What an incredible journey it was, of transformation, I dare say of revolution,” marvelled the Premier. “There was a time I feared that Nevisians would never know or remember what was done and how it was done”.

“Even in dying, in leaving us, Dr. Simeon Daniel has ensured the legacy of Nevis is preserved for ever. I am proud to have been part of that journey. To our leader, our hero, I say unreservedly your task is over.  Your work is done.  Know that God in His divine wisdom in the end determines the road we travel and the beginning and end of our journey.” 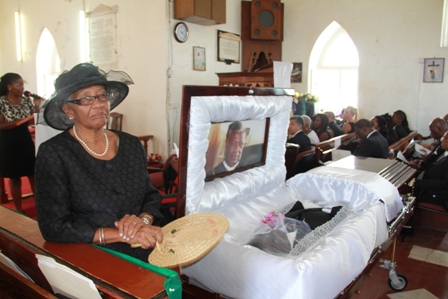 He expressed condolences to Dr. Daniel’s widow Mrs. Sheila Daniel and her family, from the government and people of Nevis, and from his wife and children.

Premier Joseph Parry told the huge congregation which came from all strata of Nevisian and Kittitian society and the diaspora, that Nevis had seen a man who rose from humble beginnings, and after 1970 he rose to be the tower he was, and reminded them of the many achievements of the first Premier.

“Before 1970, no one foresaw that this quiet gentleman would become the giant he was,” said Premier Parry.  “1970 is such a significant date for all of us.  It was a time of death, of mourning and despair.  It was a time of soul searching, of self-examination and eventually a time of renewal.”

He compared Dr. Daniel to the late two-time British Prime Minister Sir Winston Churchill (1940 -1945 and 1950 -1955), and claimed “that both were men in the right place at the right time”. He noted that historians have said that if there was no Second World War there would have been no Churchill.

“Someday, someone may very well say if there was no Christena Disaster there would have been no Dr. Simeon Daniel,” said Premier Parry. “For, you see, out of that disaster came the formation of the Nevis Reformation Party. That Party of Peace, Progress and Prosperity, and its first leader was Dr. Simeon Daniel.”

In the short but potent tribute, Premier Parry presented a litany of achievements of the fallen leader, the Father of modern-day Nevis and first Premier of Nevis (1983-1992). He noted that he left office as a true democrat and a social revolutionist. He told of the years Dr. Daniel ran an almost “broke administration”, but one he turned around, and made it one of the most successful economically. 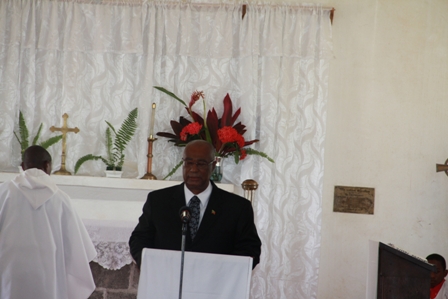 What made Dr. Daniel, the formidable leader that he became was the fact that most of the development that he brought to his home island ended up being a first for the region, including the first Land Reform Programme in the OECS.

According to Parry, every Nevisian was given the opportunity to own a piece of the rock for a price as low as EC $3,000 for a half acre plot. He said that act by itself changed the mentality of every Nevisian, a thing that has made them love land. Dr. Daniel gave the land to them, and they got a sense of ownership, a sense of pride, a sense of belonging and identity, he said.

“When you travel around Nevis today, through Spring Hill, Nisbetts, Maddens, Fothergills, Hardtimes, Prospect, Hamilton and Cades Bay, and we marvel at the lovely homes and beautiful gardens, let us remind our children and grandchildren that they owe these blessings first of all to God, and then to Dr. Daniel, and the men around him as well,” said Premier Parry.

Parry also noted accomplishments in the area of education, banking and here mentioning the Bank of Nevis and the Development Bank, and in tourism, where after Dr. Daniel brought the Four Season Resort on February 14, 1991, Nevis which had a high unemployment rate before then, ended up being an importer of labour.

“It is my wish, and the wish of all Nevisians on this your final journey that the angels on high embrace you, lift you up in heavenly flight to join that glorious congregation and may eternal peace embrace you forever and ever,” concluded the Premier. 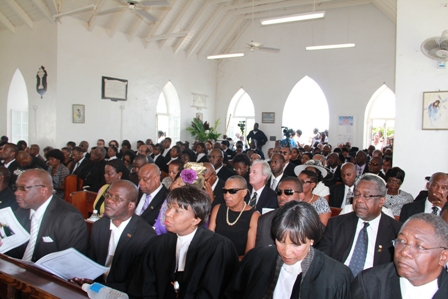 Among those in attendance at the Funeral Service was Daniel’s personal friend Governor General, His Excellency Dr. Sir Cuthbert Sebastian, the Deputy Prime Minister Hon. Sam Condor, the Speaker of the Federal Parliament Hon. Curtis Martin, government ministers from both the Federal Government and the Nevis Island Administration, and members of the legal fraternity. Daniel served at the local bar for nearly half a century.

Dr. Daniel’s body was interred at the western end of the Church cemetery before dusk.