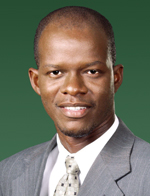 Born – 5th September, 1971, St. James Parish, Nevis
Career and Work Experience
1990 – 1993 – Attended the Law Faculty of the Cave Hill Campus University of the West Indies, Barbados
1993 – 1995 – Graduate from the Hugh Wooding Law School, Trinidad
1995 – Admitted to practice as Barrister – at – Law in St. Kitts and Nevis
1998 –   Appointed to be a Notary Public of St. Kitts and Nevis
1999 – Admitted to practice as an Attorney – at – Law at the British Virgin Islands Bar
1995 – 2006 – Worked as a Lawyer in the Law firm of Nisbetts primarily engaging in advocacy, property succession, real estate and conveyancing matters
Community Involvement
1997 – 2001 – Member of the Board of Management of the Nevis Cricket Association
– President of the Nevis Youth Council
2001 – 2003 – President of the Nevis Cricket Association
2003 – 2004 – President of Highlights International Sports Club
Political Involvement
2000 – Elected to the National Assembly to represent Constituency of St. James Windward and St. Thomas Lowland
2003 –   Appointed a member of a Parliamentary Select Committee on the future Constitutional Relationship of St. Kitts and Nevis
2004 – Reelected to the National Assembly
– Appointed the Deputy Speaker of the National Assembly
2006 – Nominated to serve on the Public Accounts Committee of the National Assembly
Honourable Patrice Nisbett Parliamentary representative for St James and St Thomas in The Federal House, son of Marion Jeffers and Aubrey Nisbett was born on the 5th day of September 1971 in the parish of St. James in the island of Nevis.  He was called to the Bar in Nevis on the 7th day of November 1995 and since then has had an active career at the Bar, engaging in both civil and criminal cases at the Nisbetts Law Firm.  While engaged in private practice, Patrice gained the reputation as the poor persons lawyer as he was one of the few lawyers always willing to take the case of the poor man and advocate on his behalf whether at the Magistrate or High Court.