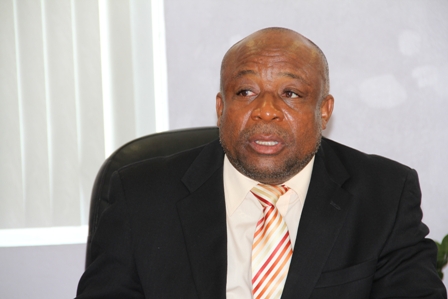 The team was on its second leg of its visit to St. Kitts and Nevis on Friday and met with local officials in the Ministry of Social Development who dealt directly with the matter of domestic violence on Nevis.

“The problem that we have with domestic violence in the Caribbean is not that it exists, it persists. That is why we have to get all of our collective human and financial resources to deal with it and I believe those who have been right in the thick and thin of this [victims] would expect no less from us.

“For all of those persons who have been battered over the years by domestic violence they would expect no less from us. They would expect us as responsible and reasonable citizens in social development, to provide some kind of alternatives for them or some means in which they can address this matter,” Mr. Daniel said. 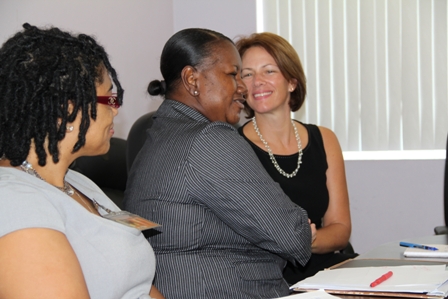 The Minister explained that it was in line with the provision of alternatives and options for the people of Nevis why he welcomed the team from the US Embassy. He further noted that the region had the capacity to deal with the challenges posed by the issue of domestic violence but it often went unrecognised.

However, he said for those who worked in the area of social development it was an area of endeavour which kept them going because although the context, method and style changed the problem of domestic violence endured.

Mr. Daniel who previously headed the Social Services Department for 10 years, referred to domestic violence as a matter which had reached the point in Nevis and the wider Caribbean where many men and women had learned to adjust to the injustice and therefore it continued.

“As a result it continues and it has led to the serious dislocation of and break up of families and we have not yet put a financial cost to this form of anti social behaviour but we certainly have to and in that context we are more than happy to work with the US Embassy and Mr. Douglas to help us to move in a new direction. 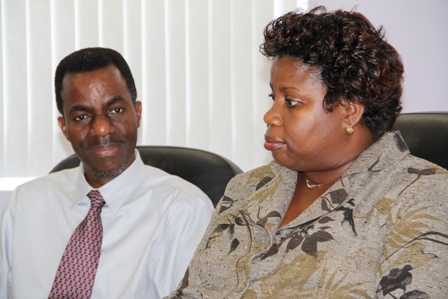 Other members of the visiting team (l-r) St. Kitts born Associate Director of Men Stopping Violence in Atlanta Georgia Mr. Ulester Douglas and Forensic Nurse at the Embassy of the United States of America to Barbados and the Eastern Caribbean Ms. Mary Thompson

The Minister told the US officials that given the NIA’s approach to working in partnerships with civil society, community organisations, with regional and international agencies and governments, the partnership to promote a society in which men and women could exchange and differ on ideas and approaches and not lead to acts of violence was a welcome one. He thought it necessary though that the target should be the island’s men both young and old.

“We certainly would like a society in which people can express themselves and in which these old ideas of male macho image will dissipate quickly so that we can spend our energies, our time, effort and monies to deal with more substantial and critical matters,” he said.

Mr. Daniel noted that while he served as Head of the Social Services Development on Nevis his approach to the issue was markedly different.

“The old way was that if you had instances of domestic violence you must remove the women and find somewhere to put them with the children.

“I always took the opposite view to remove the men and so that in and of itself was different, revolutionary, if you will. If you had a water pipe running into your yard, you don’t remove the house, you turn off the pipe and that was the idea and I still think we need to do that,” he said.

Meantime, Head of the team Public Affairs Officer Ms. Rebecca Ross said on behalf of the US Government, they were pleased to be in St. Kitts and Nevis to continue the cooperation to work on shared issues and to work together through challenges to find solutions.

“Partnership is key whether it is local, national, regional and international level to solve any issue. At the Embassy in Barbados we cover seven countries of which St. Kitts and Nevis is one and we are very glad to be here to work on this and to work on security issues because this is in essence a security issue, it’s an economic issue it’s a societal issue and it touches each and every one of us.

“Under President Obama’s Caribbean Basin Security Initiative we have been working on all different kinds of security and social justice is an imperative part of this cooperative effort. So that is why we are here and that’s why we have brought our team to work with you on this particular issue of domestic violence,” she said.