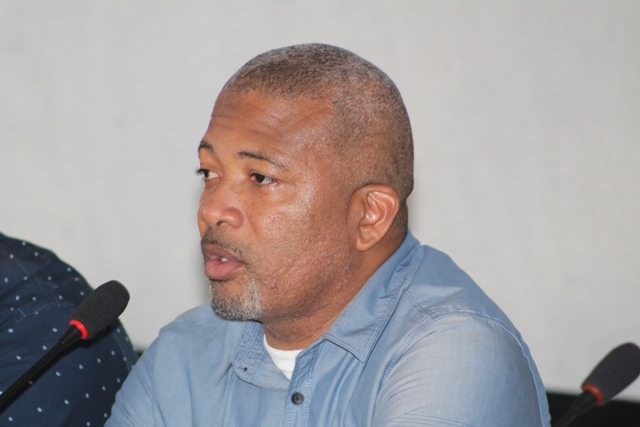 Hon. Spencer Brand, Minister of Public Works on Nevis, at a town hall meeting hosted by the Ministry of Public Works at the Albertha Payne Community Centre on October 21, 2018

CHARLESTOWN NEVIS (October 22, 2018) — The Public Works Department in the Nevis Island Administration began making way for the first phase of the Bath Village Road Rehabilitation Project on Monday, October 22, 2018, one day after Hon. Spencer Brand, Minister responsible for Public Works announced the project at a town hall meeting at the Albertha Payne Community Centre in Bath on October 21, 2018.

The first phase of the 1,650 feet project, which will cost the NIA $450,000, is expected to be completed by the end of 2018.  It will begin from the intersection at Reliable Motors pass the roundabout in the area of Ms. Butler’s house. The second phase is expected to commence in 2019 however, the minister gave an insight into the overall project.

“My hope is that when this project is completed we would have seen the completion of rehabilitation work from Reliable Motors junction at the Island Main Road into Bath Village to the roundabout down to Black Hat, Ms. Butler, up the hill by Maude Smith Pre School all the way over to VON Radio up to Spotlight connecting right next to the good fish lady and the other side of it coming from the roundabout up the hill again to the dam all the way into Bath Village proper.

“We are also envisioning that we will see the completion of the section right here from the tamarind tree all the way to down to Flexy and the other section from the dam back down to Maude Smith Pre School. That division that we hope to accomplish once this project would have been completed,” he said.

Mr. Brand stated that the people of Bath Village have been waiting patiently for new roads and he craved their indulgence some more with the disruptions the project will cause.

“This interruption and disruption is an effort to make sure that once this project is completed we would see improved road network here in the Bath Village area,” he said.

The minister used the opportunity to thank Premier of Nevis Hon. Mark Brantley and his Cabinet colleagues for sanctioning the project. He also thanked those who attended the meeting which was organised by the Ministry of Public Works.

The project will be headed by Mr. Raoul Pemberton, Director of the Public Works Department. He will be assisted by Ms. Michelle McGrath, Civil Engineer with the department who will be directly responsible for the day-to-day operations of the project. She will be assisted by other officers of the department namely Mr. Shantez Mintos, Road Supervisor; Mr. Daniel Williams, Operations Manager; and Mr. Jamal Daniel, Surveyor.