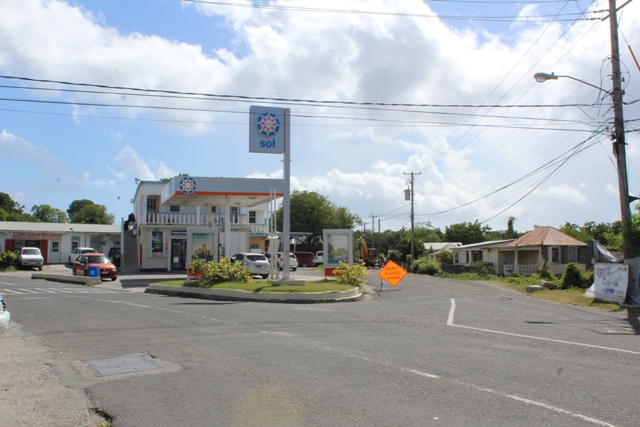 Work commences on the entrance of Bath Village at the intersection of the Island Main Road and Reliable Motors on October 23, 2018, a part of the first phase of the Nevis Island Administration’s Bath Village Road Rehabilitation Project at Bath Village

NIA CHARLESTOWN NEVIS (October 23, 2018) — Hon. Mark Brantley, Premier of Nevis and Area Representative for the Parish of St. John’s is calling on unemployed youth in Bath Village, to take advantage of the job opportunities that will come with the Bath Village Road Rehabilitation Project.

Mr. Brantley made the call while delivering remarks at a town hall meeting hosted by the Ministry of Public Works at the Albertha Payne Community Centre at Bath Village on October 21, 2018, ahead of the implementation of the project.

“We have some youngsters over here that are unemployed. There are pockets of unemployment in Bath…that I have been trying to deal with. I think the government has been trying to address… We hope to be able to hire some of the individuals in the neighbourhood itself. So my hope would be that some of the youngsters would be able to be absorbed in the process of construction…

“This is yet another avenue that we hope, that for the hundreds of thousands of dollars that we would be spending quite shortly in this village, that the people in the village will make themselves available to be a part of that as well,” he said.

The first phase of the 1,650 feet project which starts from the intersection of the Island Main Road in the vicinity of Reliable Motors, through to Mrs. Butler’s house, is expected to cost the Nevis Island Administration (NIA) $450,000. Construction work will be executed by the Public Works Department (PWD) and is expected to be completed by the end of the year.

Mr. Brantley stated that it is important for persons seeking employment to be able to access jobs in whichever community the administration is executing projects, a stance he says has been made clear to the ministry’s officials.

Meantime, the premier expressed satisfaction with other road construction projects executed by the PWD throughout the island. He assured the people of Bath Village that they would also receive the same level of work done in other road projects elsewhere on Nevis.

“We have decided that we will start … with the first phase… but I want to underscore the commitment of this government, and my personal commitment as head of this government to the people of Bath Village, to ensure that the infrastructure here in Bath is developed just like it’s being developed across the island of Nevis,” he said.

Mr. Brantley encouraged the villagers to visit other projects completed by the PWD for a first-hand look of what has been done and to see how the improved road network in the respective villages and to see how those roads are helping to enhance the lives of persons in the various communities island wide.