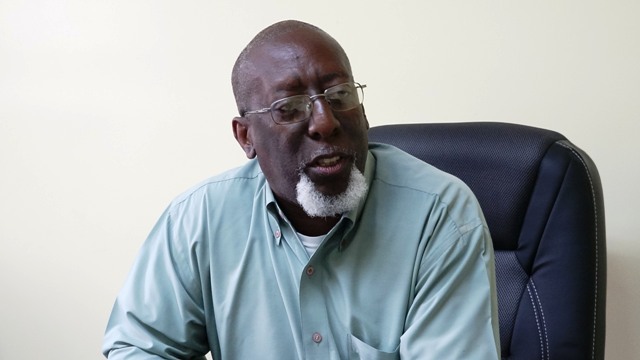 Mr. Antonio "Abonaty" Liburd, Executive Director of the Culturama Secretariat in the Ministry of Culture

NIA CHARLESTOWN NEVIS (April 08, 2019) — Plans for staging the 45thedition of Nevis’ Culturama Festival are progressing smoothly but slowly with a noticeable increase in the number of participants in the senior competitions.

Mr. Antonio “Abonaty” Liburd, Executive Director of the Culturama Secretariat in the Ministry of Culture in the Nevis Island Administration (NIA) made the revelation when he spoke to the Department of Information on April 03, 3019.

“I must admit that plans are progressing smoothly but slowly. It is said it is best for things to progress slowly and you get a chance to iron out the kinks. If things go at a pace there might be kinks that may not be ironed out so we are taking our time.

Mr. Liburd believes that the secretariat’s early marketing for the festival’s 45th anniversary is contributing to the heightened interest.

“Our Mr. and Miss Talented Youth Pageant Sub-Committee…on Wednesday, they will be meeting with the representatives from schools to come to the first meeting, and so its real early for us to be targeting our talented youth because we usually would give them an opportunity to go through Test of Standards and all of that, and then we go into the school but we are quite early and the folks at [Nevis Cultural Development Foundation] NCDF, they are already discussing with the schools about the junior parade and the cultural content that we want in the Cultural Street Parade, and so things are moving slowly but smoothly,” he said.

The Culturama Secretariat official stated that since this year’s Culturama Festival will be a significant anniversary year, the committee is hoping it will be a major event and has added to the winnings.

“We are hoping that Culturama 45…would be a major, mega celebration. Anniversaries such as 40, 45, 20, 25, 30 35, they are significant, and so we will be having in our senior pageants a costume segment and we know that we usually do costumes on these major anniversaries.

Culturama 45 is also being touted as a homecoming year and Mr. Liburd stated they would be encouraging Nevisians in the diaspora to visit their homeland.

“We will be encouraging Nevisians in the diaspora to come home and to partake in this year’s festival. There’s a lot that has gone on in Nevis in terms of development and whatever else and so we would want you to come back and experience the good things that have been happening in Nevis,” he said.