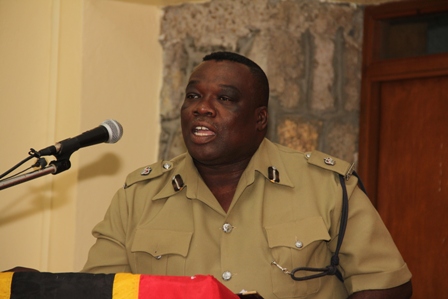 Superintendent Hilroy Brandy Divisional Commander of the Royal St. Christopher and Nevis Police Force, Nevis Division, delivering remarks at the Division’s annual New Year Programme, at the Charlestown Police Station’s recreational room on January 06, 2014
NIA CHARLESTOWN NEVIS (January 09, 2014) — Superintendent Hilroy Brandy Divisional Commander of the Royal St. Christopher and Nevis Police Force, Nevis Division, urged members stationed at the Nevis Division to persevere, continue to work hard and to be their brother’s keeper as they entered into the final year of a three-year Strategic Plan. The Plan targets crime reduction and greater partnerships on the island.
Senior Police Officer Brandy was at the time delivering remarks at the Division’s annual New Year Programme, which was held at the Charlestown Police Station’s recreation room on January 6, 2014.
“As we enter the final year of our three-year plan 2012-2014 under the theme, “Strengthening Partnership to build safer communities,” we will have to make some changes in order to accomplish our set goals of reducing crime.
“As you are aware, our plan was to reduce crime by 30 percent at the end of 2014. So far, there has been a four percent reduction in 2012 and an eight percent increase in crime in 2013, resulting in a deficit in our goal at the end of 2013. Inspite of that shortfall, however, our hard work paid off as is evident in the removal of six weapons from the streets,” he said.
According to Mr. Brandy, the imprisonment of 10 known criminals in the Nevis community during the last quarter of 2013 was as a result of good policing and as such the officers must be encouraged to double their efforts if their goal of a 34 percent reduction in crime on Nevis was to be realised by the end of 2014.
“We can do it. We have done it before, so let us work as a team and cast aside selfish motives …Only in unity can we find the strength to accomplish our goals. So take pride in your work every day.
“At the end of every shift reflect on the day, what you have accomplished, what went well and what you might have done differently. At the end of every week, reflect on the week and what were the high points of the week. At the end of every month, reflect on the month and what were the high points of the month,” he said.
Superintendent Brandy also told the officers that they should reflect on their upcoming shifts even though they were tired.
“Sure, you are tired. Sure, your feet are sore. Sure, your back aches. Everyone experiences that but you are a Police Officer [and] there is a community to keep safe. Yes, there are bad guys but there are many more good guys than bad guys. Ask yourself what am I going to focus on today? Can I help any of my brother Officers who may be going through a bad patch? We all go through those but our team can help each of us to get through them.
“I sincerely thank you and thanks for your support in 2013 and I am looking forward to bigger and better things from all of you this year. Thank You. God bless,” Mr. Brandy concluded.