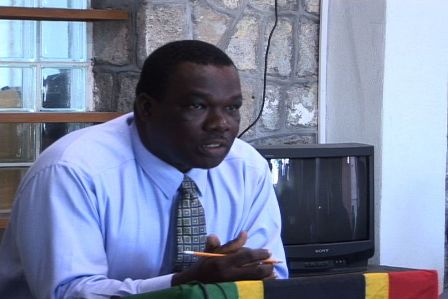 Mr. Brandy’s call came in his New Year’s Message to officers at the Royal St. Christopher and Nevis Police Force Nevis Division at their New Years Ceremony on Monday. The event was held at the Charlestown Police Station’s recreational room under the theme “Giving God thanks for a healthy and productive year”.

“I beseech all of us to take pride in what we do because what we do should be perceived to be right. Let us not spend time waiting to be patted on the back by others because when we don’t get explicit patting on the back we get discouraged.

“Instead let us work as a team and erase selfishness and doing things for our own convenience from our behaviour, for only with unity can we find the strength to accomplish our goals,” he said.

Inspector Brandy described the conclusion of 2009 as a year which marked the end of the first year of a three year Policing Plan themed “Safer Communities through partnership”. The Plan will expire at the end of 2011.

He explained that under the programme, the Nevis Police Division would continue its focus on what he described as the three strategic pillars – neighbourhood policing, safety of all and proper resource management.

“We will be fully engaged in the Division at all levels in improving the current satisfactory performance across these three focused areas; ensuring that the Nevisian public continues to benefit from a pro-efficient, efficient and effective Police Service and that it was [positioned to deal with] the considerable challenges of policing for this year and beyond…

“Colleagues, let us give our best to the Organisation. Remember no man fails who does his best. Let us as a team, let us as leaders of our communities at this early stage of 2010, remember and practise our mission statement,” he said.

The Mission statement reads: “With confidence and pride, we will enforce the law without fear or favour, malice or ill will. We will prevent crimes; we will pursue and bring to justice those who break the law.

“We will endeavour to assist and reassure all residents and visitors and we will to the best of our ability do all this with integrity and impartiality”.