Premier of Nevis and Minister of Education making a brief address
Charlestown,Nevis–( Thursday,December15th, 2011)
“Young people in Nevis need to speak their minds,” Premier and Minister of Education, the Hon.
Joseph Parry admonished scores of Nevisian educators during the 2011 Teachers’ of Excellence
Awards Ceremony held at the Four Seasons Resort Nevis on Saturday evening.

The event is held annually by the Department of Education to honour the service of distinguished
men and women who over the years contribute selflessly to the development of Nevis in the field
of education.

He said that a child expressing him or herself is very important for good growth, and to assist with making contributions to the ever-changing world.

The Premier asked the teachers to encourage students to speak up, and to practice public speaking in front of others at an early age.

“Have the children speak about a story or an experience, and tape it for television so that they can see themselves on NTV,” commented Mr. Parry.

He told the educators that it is part of their role to help the children open up, instead of grappling with small- minded things. “Let them appreciate others around them, parents, other students, people in the community,” the Premier advised. 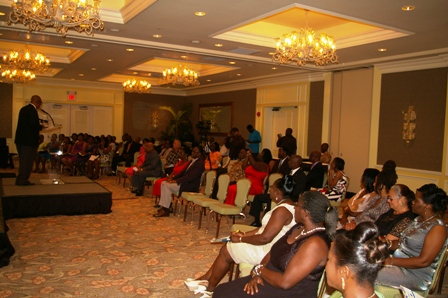 “I look around the room and I see outstanding persons including the President of the Nevis Island Assembly Mrs. Christine Springette, Deputy Premier the Hon. Hensley Daniel, and Director of Library Services, Mrs. Sonita Daniel, and I know that they have been outstanding teachers and they encouraged many persons in Nevis to be their best and to have a voice. I encourage all the educators this evening to carry on the torch and be teachers of excellence”, concluded the Premier.

Each Teacher of Excellence received a certificate of recognition, a laptop, a cash award and aplaque.

The awardees were selected by their peers and approved by the Principal. They were also required to submit a teaching portfolio, a video recording of an in-class session, and a pre-recorded interview which was aired on NTV Channel 8 prior to the awards ceremony.

In the third category Recent Retirees Mr. Oliver Beazar and Mrs. Gurtis Brown were applauded for their work of educating young people.

The Premier congratulated all of the award recipients and said he wished them well in all their future endeavors.