Premier of Nevis Hon. Vance Amory presenting the 2017 Budget Address at the Nevis Island Assembly, Hamilton House on November 30, 2016
NIA CHARLESTOWNN NEVIS (December 01, 2016) — Premier of Nevis and Minister of Finance Hon. Vance Amory, presented the Nevis Island Administration’s $236.3 million tax-free budget, when he delivered the 2017 Budget Address in just over two hours, at a sitting of the Nevis Island Assembly on November 30, 2016. The theme is “A Revitalization of Skills Development and Entrepreneurship for Economic Success.”
Mr. Amory said that there is an increase of 22.42 percent in the 2017 budget over that of 2016 which is driven mainly by the Administration’s formidable capital investment budget.
The Ministries of Finance and Communications received the largest chunks with $82.3million and $39.7million allocations respectively, which represents 35 and 16.8 percent of the overall budget.
Regarding no additional taxes, Mr. Amory said the Administration believes that excessive taxation serves as a deterrent to increased economic growth and prosperity. He said it is also the duty of every Administration, to sustain growth in the economy by expanding economic activities in a way that creates opportunities for its people.
“We must continue to create good quality jobs and expand opportunities for entrepreneurial development, in an effort to improve the livelihood and standard of living of our people,” he said.
The Finance Minister noted that $157.29 million of the budget was allocated to recurrent spending, which represents a 66.57 percent of the total projected budget expenditure.
With regard to collections, Mr. Amory stated that the Administration is projecting to collect $140.26 million in Recurrent Revenue, with the amount of $105.12 million to be generated from tax revenue. Non-tax revenue will contribute to the remaining $35.14 million.
When compared to the projected Recurrent Expenditure of $157.23 million, he said there is a deficit of $16.97 million, which will be covered by the ongoing monthly transfers of $2.5 million from the Federal Government, as part of Nevis’ fair share of revenue from the processing fees under the Citizenship by Investment (CBI) programme.
However, the Premier noted that in spite of the projections, there will be very strict tax collections in 2017.
“It is also expected, that the Inland Revenue Department will concentrate on bringing all properties into the tax net to maximize our revenue collection.
“This Administration expects every citizen to pay their fair share of taxes, as we endeavour to provide the best service in education, health and public utilities for all at a reasonable cost,” he said.
In the area of Capital Expenditure, $79.01 million is allocated to capital expansion, a 33.44 percent of total projected expenditure. It represents a 120 percent increase when compared to the capital allocation of the 2016 fiscal period.
Mr. Amory, explained that the increase in the capital budget, symbolises the determination of the NIA to undertake a number of capital investment projects that are ready for implementation, for which funding has already been identified.
He said the Administration will take a strong approach in the ongoing development of the island and seek to establish public/private partnerships in the process.
The new projects along with ongoing ones, he said, form part of the Administration’s infrastructural development programme and underscores the NIA’s commitment towards the continued future development of the island and provide employment for the people of Nevis. 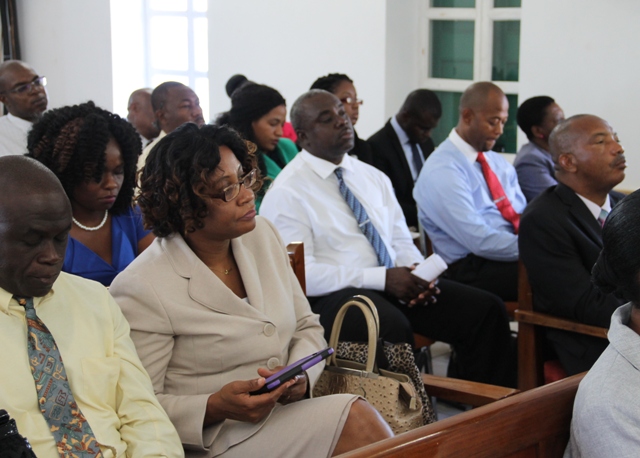 Funding for the capital expenditure programme will come from a $2.0 million loan disbursement from the Caribbean Development Bank (CDB) for the Water Enhancement Project and committed disbursements from the Sugar Industry Diversification Fund (SIDF).
In addition, the Administration will seek loan funding from other local financial entities at concessionary rates that will not exceed four percent per annum, to complete funding for those programmes.
Mr. Amory, also stated that the projected Recurrent Revenue for 2017 is $140.26 million which represents a 0.58 percent increase over that projected for the fiscal year 2016.
He said the projected recurrent spending of $157.29 million, represents a 5.61 percent increase over that of 2016. Salaries and wages account for 48.2 percent; debt servicing 19.45 percent and retiring benefits 5.14 percent, with the remaining amounts allocated to the procurement of goods and services.