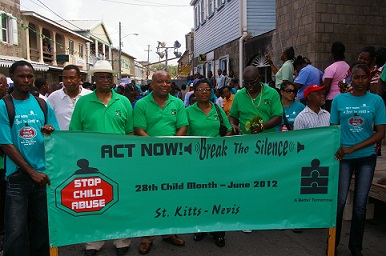 The Premier, who is also Minister of Education, told participants prior to the march about the many efforts made by the Nevis Reformation Party (NRP)–led Administration to help students and their parents. He discussed the many programs designed to assist families including the schools’ meal program as well as counseling and parenting programs.

“It is important that parents take responsibility for their children from birth until the children leave school,” said Mr. Parry.

The Premier also appealed to fathers to be role model parents, and support the children in every way possible.

“We want the mother and father to play the pivotal roles they are supposed to play” commented Premier Parry.

This year, the march began at the Nevis Cultural Centre led by the Hon. Joseph Parry and Deputy Premier, the Hon. Hensley Daniel and ended at the Grell- Hull and Dora Stevens Netball Complex where a number of speakers spoke of the theme , “Act now, break the silence; Stop Child Abuse!