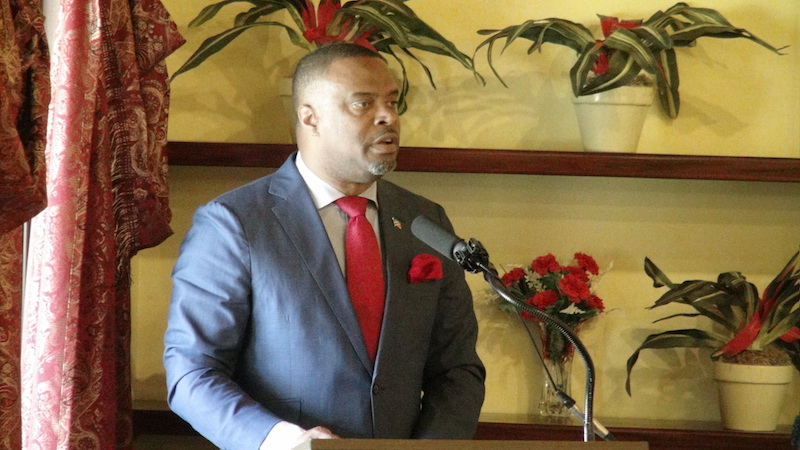 Premier of Nevis Hon. Mark Brantley delivering remarks at the opening ceremony of the two-day Commonwealth Parliamentary Association’s Post Election Seminar at the Mount Nevis Hotel on May 15, 2018

NIA CHARLESTOWN NEVIS (April 16, 2018) —The following remarks were delivered by Hon. Mark Brantley, Premier of Nevis at the opening ceremony of the two-day Commonwealth Parliamentary Association’s Post Election Seminar at the Mount Nevis Hotel on April 15, 2018

I am indeed honoured and humbled to be given the opportunity to speak at this Commonwealth Parliamentary Association Post Election Seminar.

Post-election seminars such as this, provides the opportunity for participants to build capacity and expand knowledge of parliamentary procedures and practices, learn from other Commonwealth jurisdictions and to share emerging issues in the tradition and practices within the commonwealth.

The organization and conduct of our recently concluded Nevis Island Local Election, demonstrated our commitment to the Shared values of the Commonwealth Charter which states: “We recognize the inalienable right of individuals to participate in democratic processes, in particular free and fair elections in shaping the society in which they live.”

Our election is over and a Government has been formed, however, it is important for us to note that this is not the end of the road but the beginning to a life of service and responsibility to the people of our lovely island.

The CPA has had a long and distinguished record in the history of modern democracy.  It begun in 1911 as an Empire Parliamentary Association when the British Empire was at its pinnacle.

In 1948 as the Empire began to unravel, it changed to what it is today, the Commonwealth Parliamentary Association. The CPA is a Parliamentary Community comprising of 53 nations and 180 parliaments which promote parliamentary democracy by enhancing knowledge and understanding of democratic governance.

Its many educational programmes on parliamentary practices and procedures and its efforts in training knowledgeable and efficient parliamentary staff, are all in keeping with the Association’s goals of strengthening and promoting democracy in the world.

The Commonwealth is diverse and democracy among its member states takes different shapes and forms.  It is therefore critical that we become inclusive and embrace different culture, tradition and values as we endeavour to strengthen and promote democracy globally.

As we become more embracive and inclusive, we must however, continue to commit ourselves to the values and tenants that define us – free and fair elections, rule of law, separation of powers, respect, understanding, tolerance, freedom of expression, gender equality, good governance and human rights.

Over the next few days, as we deliberate, I urge all participants to consider ways in which we can strengthen the core principles of democracy.   Our efforts in this regard, should be tangible and not confined to ideas, concepts or precepts, but should look for meaningful ways in which we can impact people’s lives.

As we interact and learn from each other, consideration should not only be given to parliamentary processes and procedures, but high priority should  also be given to the people’s welfare, the economic progress and development of the people -simply put, I urge you this morning to think people, become people-centric because people matter most.

Let me conclude by stating that I have had the opportunity to examine the programme for this seminar and I have noted that the sessions were carefully tailored to assist us in the discharging of our duties.

I have also observed that session seven addresses women in parliament. This session looks at the challenges faced by women on the road to parliament and the obstacles to their equal participation.

Let me here applaud the work of the Commonwealth Women Parliamentarians as they seek to increase female representation in parliament and recognizing the importance of gender in all of the CPA’s activities.

Thank you once again  for your kind indulgence and I am confident that upon the conclusion of this Post Election Seminar, all will return to the Assembly and Parliament with greater insight and increased knowledge.