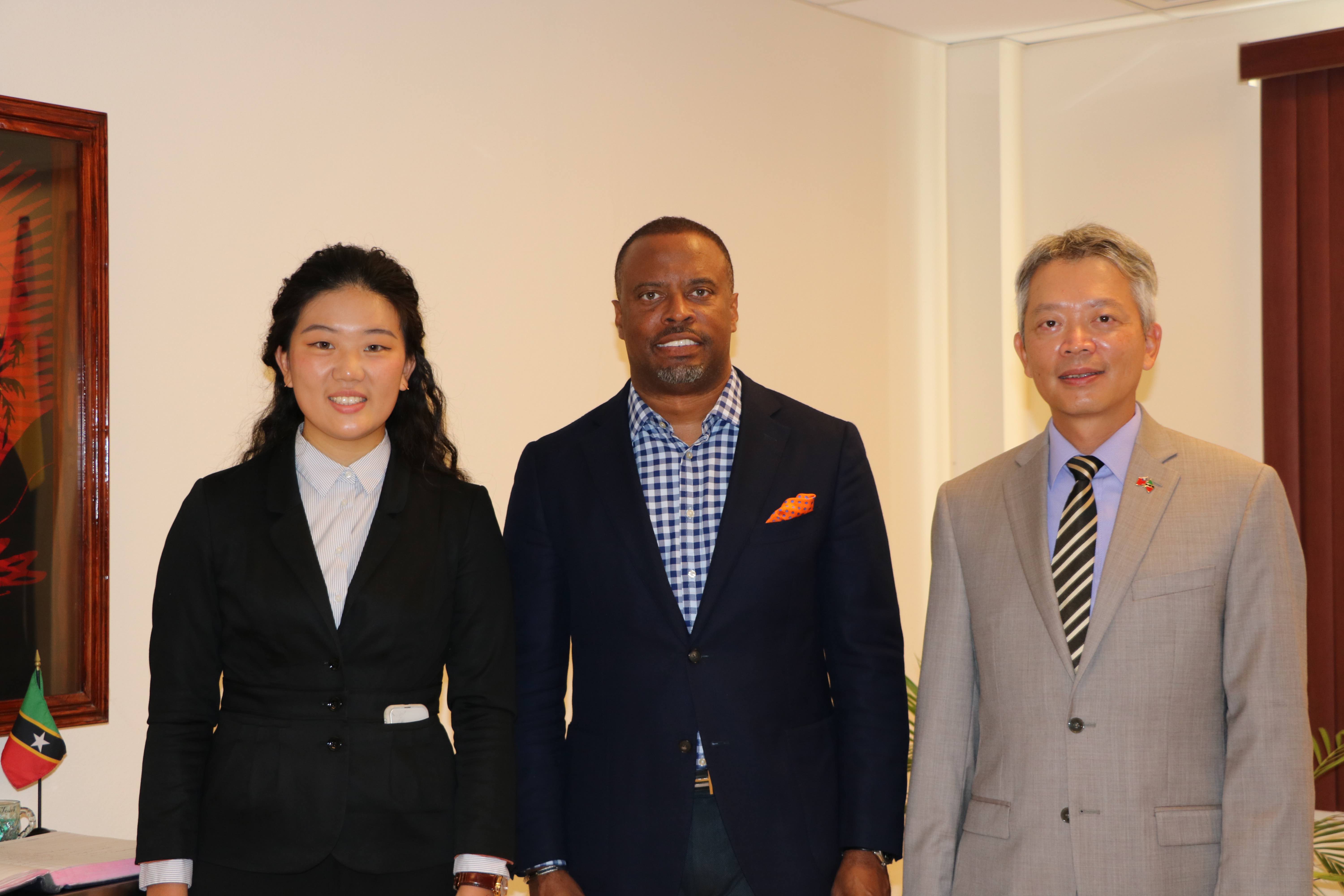 Ms. Chen Chi, professional Mandarin teacher from the Republic of China (Taiwan) (right); and His Excellency Tom Lee, Republic of China (Taiwan) Resident Ambassador to St. Kitts and Nevis (left) with Hon. Mark Brantley, Premier of Nevis and Minister of Education in the Nevis Island Administration, and Minister of Foreign Affairs in St. Kitts and Nevis on October 21, 2020 at his Pinney’s Estate office

NIA CHARLESTOWN NEVIS (October 21, 2020) — Secondary school students on Nevis, ages 12 to 14, will soon have the opportunity to learn Mandarin, in addition to the English, Spanish and French languages which are currently being taught at the island’s high schools.

Hon. Mark Brantley, Premier of Nevis who is also the Minister of Education, was introduced to Ms. Chen Chi, a professional Mandarin teacher assigned to the federation, at his Pinney’s Estate office on October 21, 2020, by His Excellency Tom Lee, the Republic of China (Taiwan)’s Resident Ambassador to St. Kitts and Nevis.

“I think that the public would know that my government has championed education and training. We feel that is a critical approach to national development and we have as part of that decided that we must expose our people to foreign languages…

“Many of our students who have gone and studied in Taiwan under the long tradition of cooperation that we have with your country, they have come back and many of them do speak the language. The purpose of course for us now is to expand that and to ensure that the young people, our school aged youth, are equipped with Mandarin skills…so that if they are successful in going off to Taiwan to study in the future, they will already have basic language skills which will enable them to study and perform more effectively in terms of their learning in Taiwan,” he said.

Mr. Brantley, who is also the Minister of Foreign Affairs in St. Kitts and Nevis, noted that the presence of Ms. Chen Chi is indicative of the strong relationship which the Federation of St. Kitts and Nevis has had with the Republic of China (Taiwan) over the years.

“It is my hope that in the future many of our young people on this island will have a basic understanding and be able to speak Mandarin at a level that will equip them for the world. We are really trying to train our people and equip them for engagement with the rest of the world. That is why we think this initiative is so important.

The minister thanked the government and people of the Republic of China (Taiwan) citing that the initiative is yet another manifestation of the excellent relationship that the two countries enjoy.

During his introduction Ambassador Lee explained the rationale behind his country’s decision to send the Mandarin teacher to the Federation following his discussions with Mr. Brantley.

Meantime, Ms. Chen Chi spoke of the benefits of being able to speak Mandarin and expressed hope the students would take advantage of the opportunity to learn the language.

“I hope that the students here can grab this opportunity to gain one more ability for themselves, and also I hope they can build a better connection between Taiwan and St. Kitts and Nevis,” she said.