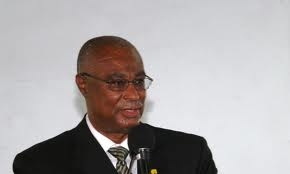 Premier of Nevis, Hon. Joseph Parry
Charlestown, Nevis (Tuesday, April. 24th, 2012)–Premier of Nevis, the Hon. Joseph Parry said he is very pleased with the caliber of new inductees now blended with existing members of the Board of Directors of the Nevis Historical and Conservation Society (NHCS), and says he looks forward to the new breath of life that will be injected into the extraordinary organization which preserves the great history of the island.

While talking to the press on Monday morning, Premier Parry said having persons with backgrounds in law, criminal justice, the arts, a museum curator, hotel services, finance, education and much more on the Board, will help the NHCS fulfill many needs, and be able to tackle a number of areas.

“The NHCS is a group that has been giving to the residents of Nevis over the years, and I am very pleased that new blood will help them continue to pursue their vision, by taking an active role in archiving the island’s past and help charting its future,” said Premier Parry.

The NHCS members include: Mrs. Asure-Dee T.C. Liburd-Browne who pursued her tertiary education at the University of the West Indies, Cave Hill Campus, St. Michaels, Barbados where she obtained a Bachelor of Laws Degree. She completed her Legal Education Certificate (LEC) at the Norman Manley Law School, Kingston, Jamaica in June, 2005, and is now a Barrister-at-Law and Solicitor in the Federation of St. Kitts and Nevis.

Mr. David Robinson has been in the museum business for 46 years, having received a BS, MS and MA, the latter in Museum Studies. He taught elementary and high school, primary English and History, before becoming a museum education specialist. His work has taken him to Cooperstown, New York; Dallas, Texas; Oklahoma, Barbados and Nevis. From 1983 to 1987 he served in the US Peace Corps as a museum specialist.

Mr. Harvey Hendrickson possesses a passion for youth, and is desirous of assisting with the nurturing of their educational, moral and spiritual development, wherever possible. He is also a local preacher-on-trial in the Methodist Church. Mr. Hendrickson is a strong activist in the preservation of Nevis’ historical sites and cultural heritage.

Mr. David Johnson, from Texas, came to Nevis in 1992 having accepted a two-year post with the Four Seasons Resort Nevis. In 2007, he retired after 25 years with Four Seasons, and has worked along with several NHCS activities.

Mr. Jeffrey M. Wroth is a graduate of the School of Landscape Architecture at the University of Oregon. His work in the Caribbean has included planning luxury villas, the beach club landscape installation at Christophe Harbour, villas at Four Seasons Estates, installation management for both phases of the upgrade at Golden Rock Inn, and multiple historic landscape renovations for modern residential uses.

An alumnus of both the Gingerland Secondary School and the Nevis 6th Form College, Ms. Kelva Merchant graduated 1st Class Honors from the University of the West Indies, Cave Hill Campus, with a double major BSc. Degree in Economics and Accounting, and thereafter, pursued graduate studies, in the form of a MSc. Accounting and Finance Degree, at the London School of Economics and Political Science. 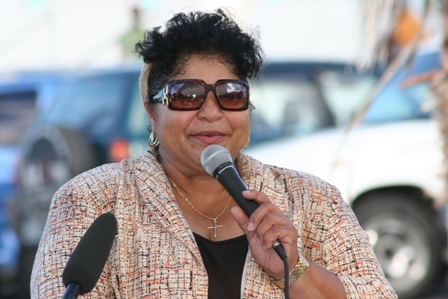 Mrs.Marcia Smith, made Nevis her home in 2009 with the aim of building a model sustainable house, and promoting sustainable building practices in Nevis. She soon joined the NHCS and has been contributing as a biodiversity committee member. In just over 2 years, Marsha has helped author several grant submissions, served as editor for ‘The Gathering’, and enthusiastically participated in NHCS events such as the International Coastal Cleanup, the Clean Island Sweep and the Marine Awareness Workshop.

Passionate about the island of Nevis, Mr. Mark Ludlow loves Nevis and the special people who live here, and he hopes he might contribute to the community – as the community of Nevis sees fit. The study of the birds of Nevis is of particular interest to him. If you see a large, balding man with a white mustache with a pair of binoculars around his neck or up to his eyes, it is probably him. He invites you to talk to him about the birds of Nevis or nature in general.

Director of the NHCS, Mrs. Evelyn Henville says she looks forward to the year ahead, as the new board has many positive activities in store for the island, and residents of Nevis.