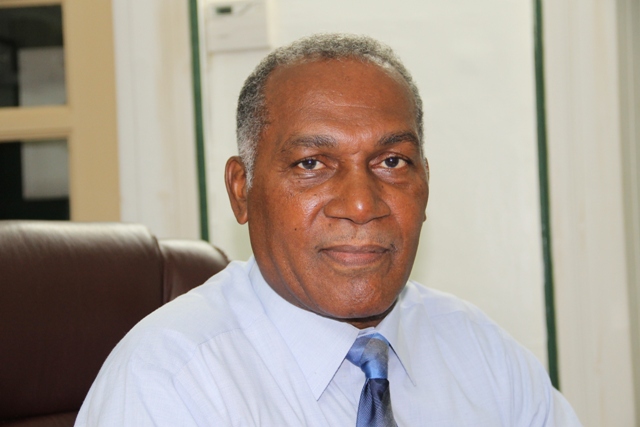 Premier of Nevis Honourable Vance Amory discussing the Nevis Island Administration’s position on employment in his office at Bath Hotel on January 22, 2016
NIA CHARLESTOWN NEVIS (January 29, 2016) — Premier of Nevis, Honourable Vance Amory met with the Permanent Secretaries, to discuss their concerns and their plans to effect the policies of the 2015 Budget for the benefit of Nevisians. One of the matters discussed was employment for young persons and he went on to encourage young people to seek employment wherever it is available.  The Premier spoke to the Department of Information from his Office in the Premier’s Ministry at Bath Hotel, on January 22, 2016.
Mr. Amory said he has asked the Permanent Secretary to liaise with the Labour Department to discuss a process of linking the job seekers to the job providers and also advise the Department on promoting the availability of existing jobs.
“What I’ve done as well is to advise the Department of Labour through the Permanent Secretary to promote more effectively the availability of jobs wherever they are. We have indicated to the employers, those who are creating the jobs, to place with the Department of Labour the job opportunities which exist. I want to encourage those who are seeking employment to base their request for jobs with Labour Department so that we can link the need for a job with the availability of a job and get the unemployment situation under control.”
He also stated that in an effort to control the problem of unemployment, his administration has indicated to employers the necessity of informing the Labour Department of available job opportunities and pointed out that job seekers should lodge their request for employment with the Department so it can link their unemployment needs to the available jobs.
Further the Premier, said, anyone wishing to work in the Nevis Island Administration, should indicate in their application, their qualification and occupational interest so that the most suited person can receive placement for the most suitable job. In his view the development of the economy depends on the ability of Nationals to work.
“I want to ask anyone who wants to work with government that they make an application, setting out their qualifications and the jobs they would like to have so that when a job opportunity arises we can fit the best person for the job that is available. That is my charge to you today and I want to ask that we take this charge seriously because the economy and the development of our people depend on the ability of our people to work, to have employment for themselves, so that they can become self – sufficient and independent.”