Premier Parry at University of the West Indies, Cave Hill Campus
CHARLESTOWN,NEVIS–(TUESDAY, NOVEMBER 15, 2011)  Premier of Nevis, the Hon. Joseph Parry met with the St. Kitts-Nevis Students Association of the University of the West Indies, Cave Hill Campus at the Faculty of Law Moot Court on Tuesday evening, November 8th.
The Premier, who holds responsibility for education in the Nevis Island Administration (NIA) was accompanied by the Principal Education Officer (PEO), Mrs. Lornette Queeley Connor who was in Barbados attending a number of official business meetings with the Premier, including a visit to the Caribbean Examinations Council (CXC) Headquarters.
The Cave Hill meeting which attracted approximately 40 students began at about 8:30p.m, with the Premier greeting the students and giving a brief address, which was followed by a question and answer session.

‘The Students were very welcoming, interactive and showed great interest in what was happening at home in St. Kitts-Nevis,” said Premier Parry.
Both the Premier and Mrs. Connor agreed the meeting was a success and thanked the President of the St. Kitts-Nevis Association and the students for the positive outcome of the event.
“President, Mr. Azard Gumbs did a fine job organizing the occasion and ensuring that the students came out in their numbers and participated, for this I am very grateful,” said the Hon. Joseph Parry.
In response to the Premier, Mr. Gumbs expressed appreciation for the Premier’s visit. 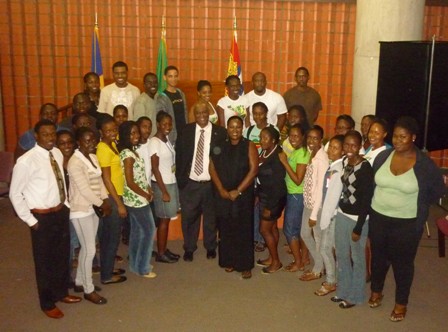 “On behalf of the Association I wish to express sincere gratitude to the Hon. Joseph Parry and the Principal Education Officer, Mrs. Lornette Queeley-Connor for being so gracious to pay us a visit while on official business in Barbados,” stated Gumbs.
The Premier returned to the island on Wednesday, November 9th after meetings in Antigua and Barbados. In Antigua he cemented the ties between Nevis and the Caribbean carrier LIAT, both parties agreed to assist with marketing the destination at the recently concluded World Travel Market (WTM) in London.  The Premier also met with Prime Minister Baldwin Spencer, and explored the possibilities of setting up a centre for Continuing Education on Nevis.