“Our people have come a long way. So now is the time to pause, to reflect, to gather the strength and determination to continue our journey”.

So said Premier of Nevis, Hon. Joseph Parry, at the St. Kitts- Nevis Association of Florida’s (SNAF) annual Independence dinner and dance in Miami recently.
He delivered the keynote address in celebration of the 25th Anniversary of Independence for St. Kitts-Nevis at the Howard Johnson last Saturday.

The Nevisian leader was invited by the non-profit St. Kitts- Nevis organisation to speak about the growth of the Twin Island State over the last 25 years.

Premier Parry told his audience: “In the life of a nation, 25 years is immeasurably short.Yet there is so much we can be thankful for, so many positive changes have taken place. We have moved from sugar on St. Kitts and general agriculture on Nevis to an economy led by all year
Mocko Jumbies entertaining patrons at the well attended dinner
round tourism, a sophisticated financial system, manufacturing and construction sector.”

In discussion on Education and Health care, Premier Parry declared that education equals any in the OECS and challenges the best schools in the United States. Mr. Parry added that the Social and Health Care system was basically modern even though the island “could not rival the sophistication of larger countries”.

The Premier also talked about the influence of crime and the role of North American television on the young men of Nevis.  He said that the island had adopted some habits and practices that were alien to its teachings and practices.  He  went on to state that the Nevis Reformation Party (NRP)-led Nevis Island Administration had put together training in plumbing, masonry and carpentry with the idea that skill training will give people the opportunity to become gainfully employed. 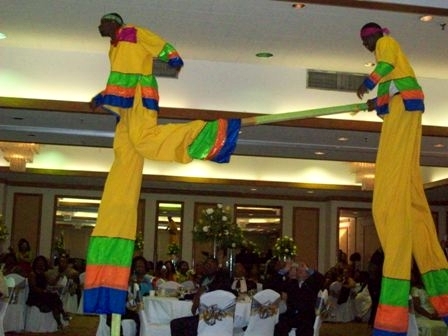 Founding Member, Mr. Troy Rawlins said he was pleased that Premier Parry was able to take time out of his busy schedule to be the keynote speaker on the occasion of the country’s 25th Anniversary of Independence.  He said he was particularly impressed by the vision of the new Nevis Island Administration as articulated by Premier Parry.