The Nevis Reformation Party (NRP) led Nevis Island Administration (NIA) made another manifesto promise a reality, with the official opening of the Drag Race Strip in St. James Parish on September 18, 2008.

Premier Joseph Parry in declaring the new track open at New River said the track was for the people of Nevis, in particular the young people.

“My Administration has displayed that we care for the young people of Nevis by facilitating training programmes which were recently undertaken by 17 persons who received the opportunity to learn masonry, carpentry, plumbing and a host of other skills. Now we the (NIA) have facilitated a drag strip, to keep the young men occupied and
A car on the drag racing strip

The St. James Drag strip which came at a cost of EC$ 3million, will provide an opportunity for business persons from Butlers, Bricklyn and Zion to benefit from activities held at the race track as residents will be able to sell food, accommodations and mechanic services.

Designed in keeping with international standards, the drag race strip was built by Surrey Paving and Aggregate Ltd. of Jamaica.

Also addressing the ceremony was Nevisian Neurosurgeon, Dr. Geoffrey Liburd, a resident in Jamaica and an avid drag racing fan, was invited by Premier Parry.

“In Jamaica, statistics indicate that for 2007 traffic road fatalities there were 257 deaths. In 2008 up to September 11th, there were 219 fatalities. In my six years as being the doctor on call there has been zero fatalities in organised drag racing.” 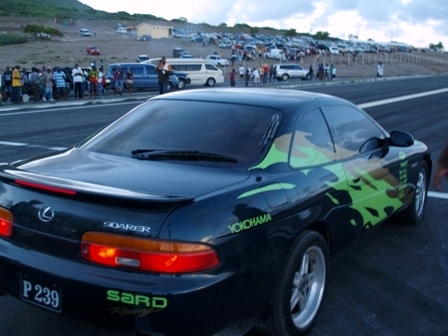 A section of the audience at the official opening of the Drag Racing Strip at New River
Dr. Liburd went on to say that the Nevis Drag Race Association (NDRA) will create   better and more responsible drag race drivers and the organisation will teach people that, “drugs, alcohol and driving does not mix.”

In addition, Dr. Liburd reiterated the Premier’s sentiments when he said that Tourism, brand marketing and grass roots businesses will get a boost from the drag strip.

“People from the region will come to compete and they will bring revenue to the island. Brand marketing will take place by brand name products or services that will purchase advertising space on cars or signs in the racing facilities. There will also be some grass root vendors who will sell snacks and drinks.” 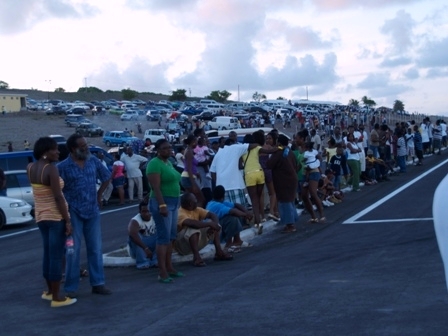 A special treat during the ceremony was when Tempo General Manager, Mr. Fredrick Morton surprised the audience when he invited a number of artistes, to provide a taste of Friday night’s Tempo concert. In keeping with the station’s motto of “Badness Outta Style”, Mr. Morton also gave a few words of inspiration to the young people of Nevis.