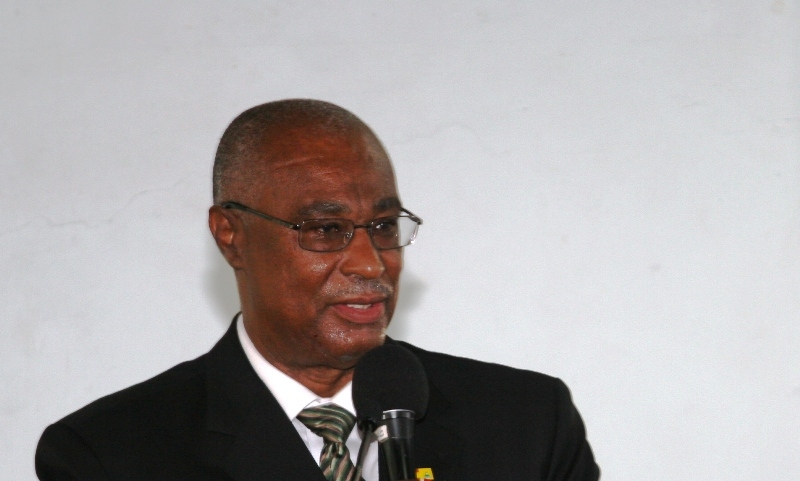 Premier of Nevis, Hon. Joseph Parry (Photo by Peter Ngunjiri)
Charlestown, Nevis – (Monday, February 13, 2012)–Premier of Nevis and Minister of Finance, the Hon Joseph Parry, has said that the Nevis Investment Promotion Agency (NIPA) has come of age and assumed a number of investment portfolios which he feels will now be better handled by the agency that is headed by Mrs. Bernadette Lawrence.

The Nevis Investment Promotion Agency was launched on May 21, 2008 and according to the Premier, has responsibility for investment promotion, investment facilitation, aftercare services and advocating policy changes to enhance the investment climate in Nevis.

Speaking Tuesday, February 7 on his weekly program, ‘In Touch With the Premier’ on Choice 105.3 FM and other radio stations in the Federation, the Premier observed that some years ago Nevis was rated as the 83rd most difficult country to do business in, and his Nevis Reformation Party-led government felt that something had to be done to correct that situation.

“We established what we call the Nevis Investment Promotion Agency (NIPA) and the idea was that NIPA would market financial services and investments in Nevis, and it would provide and facilitate any effort of an investor to get his business done,” said the Premier.

He added that persons wishing to do business in Nevis would go to NIPA, which has representatives from the Planning and Finance Departments of the government, the private sector, and someone who is in touch with the Cabinet. In that way, the government hopes that it can speed up investments on the island.

“I had my first meeting with NIPA on Monday, February 6 and I was very pleased with the way it went, and I am sure that we will see good things coming out of NIPA,” reported the Premier. “Mrs. Bernadette Lawrence has been employed by NIPA for some time now, and she has been able to bring a Dr. Naggi here for development of the Cosmetology Centre.”