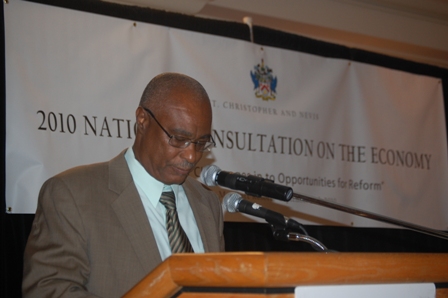 Premier of Nevis, Hon. Joseph Parry at the National Consultation at the St.Kitts Marriott Resort

In brief remarks at the 2010 National Consultation on the Economy in Basseterre on Thursday, Premier of Nevis Hon. Joseph Parry said Nevis had experienced a number of financial challenges and a review of strategies on how and who to conduct business with and the nature of that should be undertaken in Nevis.

“There is a shift,” the Premier said and according to him the shift had taken place with China, India and the Middle East.  He added that, “they are the ones showing growth and a dynamic move forward.”

Mr. Parry said citizens of the Federation need not to only look at the United States and Europe to conduct business but ulterior areas for business opportunities such as South America, Africa, and the Far East.

“I want all of us to understand that change and opportunities are out there and we should take advantage of the chance.  There is a need to broaden our outlook on the world,” said the Premier. 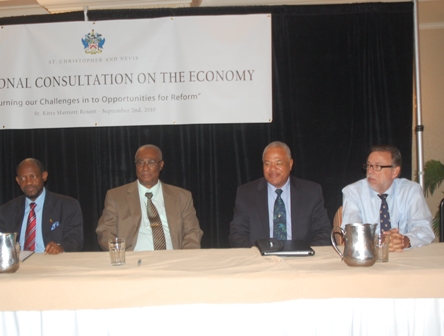 Mr. Parry explained that many of those countries had a similar history and experience of Colonialism and domination of the Western World and many of them may have sympathy for what St. Kitts- Nevis had experienced over the past 300 years.

“It is for us to look at new directions and take advantage of new opportunities,” he said.

For greater economic independence for Nevis, Premier Parry and his Nevis Reformation Party (NRP)-led Administration had taken an active role in the re development of the present stagnant Financial Services industry on the island.

The Premier said he was unhappy with the status quo of the Financial Service Sector on Nevis.  He went on to say that there are always vested interests in a developing country, who were pleased, with what little was being done.

“The local people of the country may not be doing well but they (vested interests) are doing well, so all is fine and because they are fine, there should not be any change.  As a Caribbean person, I can’t stand for that.  I find it very insulting as a Nevis Man and as a Caribbean Man, that people should dare to tell me that I can’t make changes in my own country,” stated Premier Parry, to a rousing applause.

The Premier said what he found frightening, was that the people who need most help, were the very ones who were often used to prevent change.

“We need to put a stop to the misleading information. We can’t have the poor remaining poor because they are fooled into believing that they are not poor.  They are poor, because of the status quo to change.

In addition Hon. Joseph Parry said that the United States and Europe would not rest until they eradicated the financial service on Nevis for their own interest, “they have to look after themselves and we have to look after ourselves…

“There are opportunities in the Middle East and India and we should look at them in order to push this island in a positive direction,” concluded the Premier.