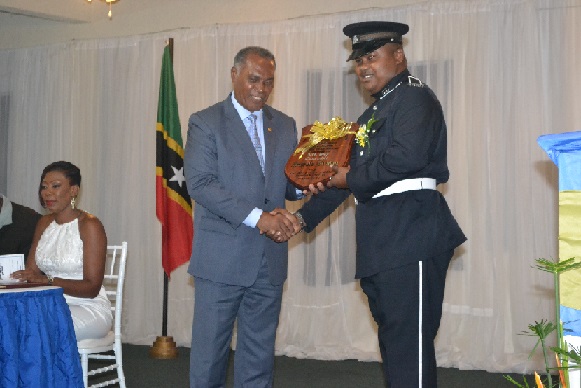 Constable Antonio Brown receiving plaque for most outstanding Constable of the Year 2015 during Constables’ Awards Ceremony held on February 06 2016 at Occasions Entertainment Arcade
NIA CHARLESTOWN NEVIS (February 10, 2016) Prime Minister of St. Kitts and Nevis and Minister of National Security Hon. Dr. Timothy Harris reminded the Awardees of their obligation, as Officers of the law, to display appropriate codes of conduct to society, in remarks made at the Constable Award Ceremony in the Nevis Division of the Royal St. Christopher and Nevis Police Force. The event was held under the theme “Fostering Community Relations to ensure Crime Reduction” at the Occasion Entertainment Arcade at Pinney’s Industrial Site on February 06, 2016.
“I want to urge the constables and to remind you that you have to demonstrate professionalism at all times, whether you are in uniform or out of uniform. You have to always bear in mind and be conscious that you are an Officer of the law and not everything that everyone else around you is doing that you can or should do,” said Dr. Harris.
He further urged the Officers to exert effort, patience and dedication in the performance of their duty to keep the communities of Nevis and by extension the Federation, safe.
“It is not about perfect it’s about effort every single day, as every law enforcement officer ought to do, that is where transformation happens and that is how change occurs.”
During this time the Prime Minister also announced the nominated Constables of the Year 2015 as Shayne James, Trevin Mills, Keith Pemberton, Monthana Mathias,Devon Jones, Kerran Nicholas, Kaygel Jefferson, Antonio Brown and Dejaunia Williams.
The selections were based on the notable performance of these Officers in their various departments.
Special recognition was also given to the three most outstanding nominees of the Constables of the Year as Keith Pemberton in third position seconded by Kerran Nicholas while Const. Antonio Brown was adjudged the most outstanding Constable of the Year 2015.
Constable Brown, who was also nominated in the year 2010 and 2014, said that he was humbled and honoured to be the recipient of the prestigious award of Constable of the Year 2015. He attributed his success to the encouragement of family, friends and colleagues.
“I must say that receiving this award would not have been possible without the support of my family and friends and colleagues He also applauded his fellow officers for their hard work, dedication and commitment to the Police Force.
“We know that this is not a competition and it is recognition of our hard work, dedication and commitment and I wish to give a round of applause to all of the officers for they all have work hard.”
He further encouraged them to be disciplined officers so that they may be emulated by the community. This may lead to the communities’ increased confidence in the Royal St. Christopher and Nevis Police Force. 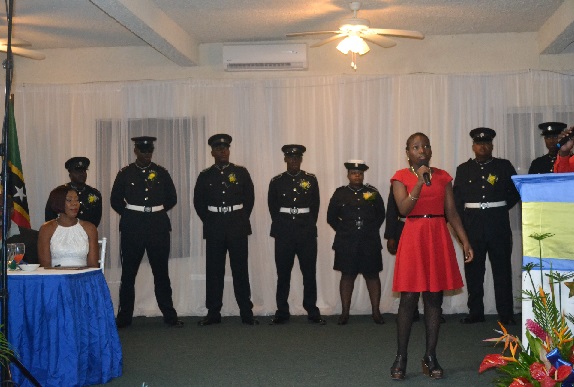 “To my colleagues I encourage you to be disciplined officers so that the community can look up to you and have confidence in the Royal St. Christopher and Nevis Police Force.”
Const. Brown also expressed special thanks to his Superiors in the Royal St. Christopher and Nevis Police Force, Corporal Carty, Sergeant Stevens, Superintendent Brandy and Former Assistant Commissioner, Joseph Liburd, in addition to, the Strategic Planning Group and the Nevis Island Administration.
Also present at the ceremony were Premier of Nevis, Hon. Vance Amory, His Excellency, Tapeley Seaton, Governor General of St.Kitts and Nevis, Acting Commissioner of Police, Stafford Liburd, Divisional Officer Supt. Hilroy Brandy and Featured Speaker, Douglas Wattley.