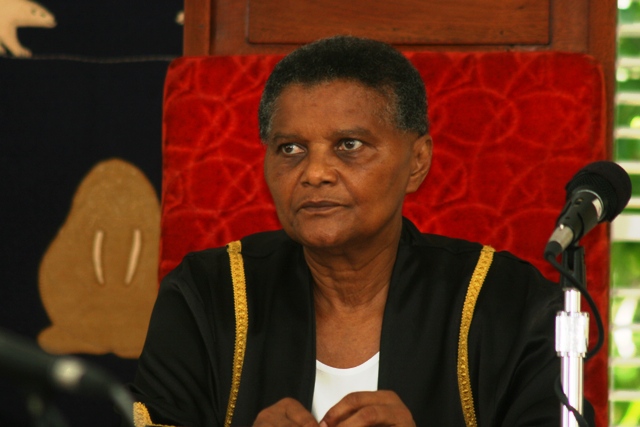 NIA CHARLESTOWN NEVIS (August 30, 2017) — The following is a press release from Government House, St. Christopher and Nevis dated August 30, 2017, regarding the profile of Mrs. Marjorie Morton who will be the new Acting Deputy Governor-General for Nevis as of September 01, 2017, to December 31, 2017.

Mrs. Majorie L Morton nee Maynard, was born on Nevis to the late Mr. James Antonio Maynard and the late Mrs. Frederica Laura Maynard. She was the sixth child of a family of seven children and she enjoyed a stable family life.

At age five, she attended the then Charlestown Girl’s School. When she reached the final class – Standard Seven, she wrote the prescribed examination and obtained the Standard Seven Certificate. She gained entrance to the newly opened Charlestown Secondary School (CSS) and was placed on the now defunct Senior Wing of the school.

At the end of the school year, she was transferred to the Academic Wing in Form 2. When she reached the Fifth Form, she wrote the overseas Cambridge Examination in 1954 and gained a Grade 11 Certificate.

On leaving school, she taught at the primary school level for a few years, although her childhood dream was to become a member of the medical fraternity. Fortuitously, the opportunity presented itself and she left home for the United States of America (USA) to pursue studies in nursing. She entered the Lincoln School of Nurses in Bronx, New York, to pursue the three year nursing course.

In 1961, she graduated with a Diploma in Nursing. Shortly after, she returned home but was unsuccessful in obtaining employment as a nurse.

After a few years of being unemployed, she returned to teaching, this time at the secondary school level. When she joined the staff at the Charlestown Secondary School, she taught English and Mathematics in the middle and upper levels at the school

When the subject Human and Social Biology was added to the curriculum, she taught the subject in both fourth and fifth forms. When the government began the thrust to ensure all teachers were trained, she was accorded the opportunity to attend the St. Kitts-Nevis Teachers’ Training College. She pursued studies for one academic year and graduated with the Certificate in Teaching from the University of the West Indies (UWI).

She returned to classroom a more qualified person in many respects. She was not just doing a job, she was molding lives. As a teacher, she was always cognizant that she was touching young, fragile lives and that “example is better than precept”. That quote guided her to establish a great teacher-student relationship with those fortunate to be taught by her.

In 1980, Mrs. Morton was transferred and appointed Assistant Secretary in the Ministry of Nevis Affairs. Two years post-Independence of St. Kitts and Nevis she was appointed Permanent Secretary Establishments in preparation for the smooth transfer of power to the Nevis Island Administration.

She said that it involved a lot of hard work but the results achieved were noteworthy, particularly in the area of decision making. She had a good working relationship with her counterparts in St. Kitts and the process evolved more easily than she had contemplated.

Additionally, she served as the Clerk of the Nevis Island Assembly. She relied heavily on the National Assembly who was always ready to give her an audience. She retired in 1994, after a combined 28 years of service in education and the civil service. She rendered these services with integrity and loyalty.

Retirement did not usher in a life of ease for Mrs. Morton, who took care of her sick husband at home for approximately six years before he died in 1997. They had three children – Paula, Brian and Jacqueline. She now has seven grandchildren and would have cherished the opportunity to be an active grandparent in every sense but geographic locations have not favoured this.

In 1996, she was elected President of the Nevis Island Assembly, the second person to be elevated to that position. The Parliament was and is still male dominated and she had hoped that a softer, gentler face would inspire more women to break the glass ceiling. She is, however, still optimistic in that regard. She served as President under two different governments before retiring in 2011.

Mrs. Morton’s activities were not confined to her professional and career goals. She was strategically involved in a number of civic relatable activities and in church work.

For a number of years, she participated in programmes offered by the Ministry of Social Development for selected students at the Charlestown Primary School in Homework Help and Mentoring. When the RBTT Bank introduced the Young Leaders Project in St. Kitts and Nevis, she was asked to be a judge for the project. She volunteered in that capacity for a period of 10 years.

She has been a lay reader at the St. Paul’s Anglican Church from 1996 to present. She studied and obtained the Diploma in Theology in 2006. She serves as a member on the Pastoral and Family Life committees.

In the 2015 National Honours Awards, Mrs. Morton was recognized with the Award of Companion of the Star of Merit, CSM for her Public Service.

She said it would be remiss of her, if she did not express sincere thanks to the persons who recommended her for the award and to the Awards Committee for selecting her as a worthy recipient.

Whatever she did and continues to do, is with love for God, her fellowmen and country and that has made the journey a joy.