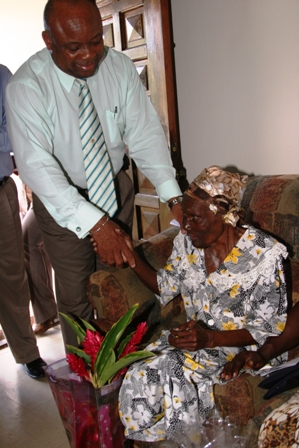 NIA-CHARLESTOWN NEVIS (January 20th 2011) — Minister responsible for the wellbeing of seniors on Nevis Hon. Hensley Daniel, said while it was easy to be negative in Nevis, the Ministry of Social Development and by extension the Nevis Island Administration (NIA) recognised the need to celebrate some of the achievements of the older persons when they reached milestones and therefore initiated a programme of appreciation in 2006.

The Minister made the comment in Zion Village Wednesday when he and other Cabinet colleagues in the NIA joined family and well wishers to celebrate the 99th birthday of Ms. Celian Irene “Martin” Powell.

“We have gone to every single parish across the country. I was with Ms. Maynard [Head of the Department of Social Services] yesterday [Tuesday], trying to do a count of all those persons. We haven’t finished yet but she has said to me there has been several.

“What we intend to do is to document them and have them just to remind all of us that these people reached these milestones, whether they were wedding anniversaries or birthdays and so for us, this programme is significant. As you can see this morning we are joined by nearly all the members of our Cabinet and it is not an accident, it is a strategic programme of the Ministry of Social Development where we highlight the achievements of the older people,” he said.

Meantime, Mr. Daniel pointed to the celebrant and noted that the spirit and alertness which she had one year before was still alive and kicking. He used the opportunity to thank her family and care givers who assisted in her achievement of such a momentous milestone. 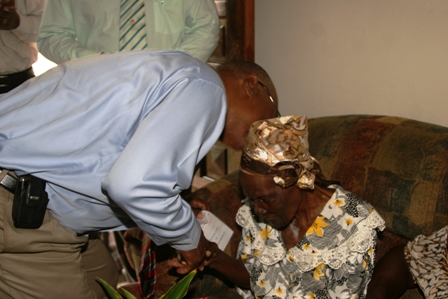 He reiterated the importance of care to older persons from familiar others and cited that Psychologists have noted if older persons were surrounded with love and care, they somehow lived longer.

“The fact that they know that they are being cared for by caring familiar others, gives them the fillip to go on,” he said.

The Social Development Minister also spoke to the examples the island’s older citizens had set for younger generations to pattern but instead it was commonplace for them to copy the models from the television.

“We are saying that there are people living right here like Ms. Powell from whom they can copy and who the whole of Zion [Village] and several other persons have learned a lot. I am sure being around for 99 years, she could tell us all that happened from that time on and she has made a significant contribution to the development of the immediate community in which she lives and also the wider community of Nevis.

“That is why we feel the urge to celebrate with them because it is a bad thing to have made such an important contribution and not be recognised. We think that since we are the head of the Government, we must take the lead and so we have come to celebrate with her and we want to trust and hope that she enjoys longer life,” he said. 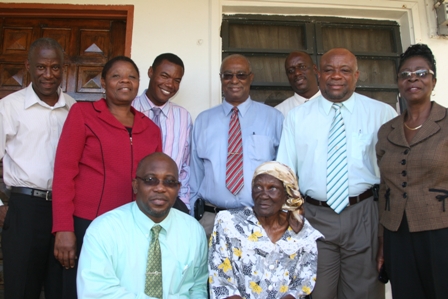 Mr. Daniel used the opportunity to underscore some of the programmes instituted during his tenure so far designed to ensure care of the elderly. He pointed to the Home Care Programme among others.

“Most recently they have gone into culture and people have been asking for the senior steel band. The younger people in the steel band movement are saying that they are here all the time how come nobody has asked them to play but the older people have hit the stage running and playing,” he said.

The Minister said he had learnt from the Department of Social Services that the Programmes for seniors had received solid contributions from the private sector and thanked them for the gesture.

To Ms. Powell he registered his best wishes. While he presented the Birthday Girl with a fruit basket he told her he believed she had done all the things necessary for longevity.

“I keep saying to the young people if you want to live long you must come over here and ask people like Ms. Powell some of the things they do; what have they used and what they don’t have they do without and they make sure that they can provide for themselves and their families. They go to church regularly; they praise the Lord with gladness and they get their blessings.

“Very, very simple formula and I am sure that if you do that, we all will be living long and so on behalf of the Ministry of Social Development we give you these fruits while you can eat them,” he said.

Premier of Nevis Hon. Joseph Parry was not far behind with his greeting. He said he was proud to be able to meet with Ms. Powell on her 99th birthday which he described as a great achievement.

“I know we want to see her do the extra one and after that we begin to count again and with the kind of vigour and energy that she has I am quite sure we will be going deep into the hundred… Just want to say great job over these 99 years, Happy Birthday. May you have long life and may you continue to be surrounded by that love and adoration that you get from your family,” he said.

Mr. Parry also told Ms. Powell of her grandson’s performance in the NIA.

“The government is very proud of your grandson Carlisle [Powell], he has been a great performer and I am sure a lot of the characteristics he has, he must have gotten them from you and that fire that you have in you, I am sure it’s in him as well and the spirit of God that walks in you I am sure walks in him as well,” he said as he planted a birthday kiss on her cheek.