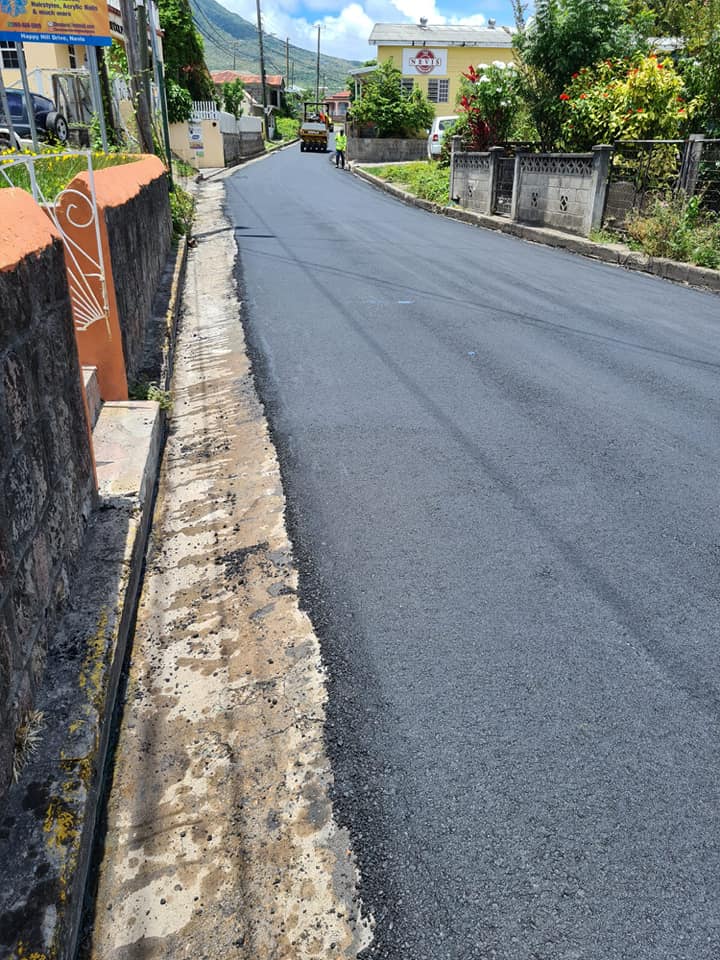 NIA CHARLESTOWN NEVIS (June 14, 2021) – – The Public Works Department (PWD) in Nevis continues its road rehabilitation programme with the resurfacing of several roads in the downtown area of Charlestown.

On Sunday, June 13, 2021, the PWD undertook the resurfacing of Happy Hill Alley. According to Mr. Jevon Williams, Director of the Public Works Department, the asphalt on that road had deteriorated over time, creating a problem for both drivers and pedestrians.

“The asphalt surface on that road was in a state of deterioration, and the edge condition was in very bad shape, which created a problem for vehicles and pedestrians using that road. On Sunday we used the milling machine to remove the old asphalt and put on a new layer. This not only improved the overall surface but also improved the edge condition which was not straight and was too high,” he explained.

Mr. Williams noted that the repaving began on June 06, 2021 with Market Street, where the asphalt was removed and a fresh layer put on.

Over the next few weeks, the PWD intends to repave part of the island main road from Boddie’s Restaurant & Pizzeria to Government Road, including the Gingerland bus stop.

Also earmarked for resurfacing is the section of the island main road from lower Government Road to Yvonne’s Unique Fashion, and lower Prince William Street from the Theodore L. Hobson Court Building to the western end of that road.

Over the longer term, the PWD intends to go further along Government Road to the Church of Christ.

Mr. Williams explained that all work is being undertaken on the weekends so as not to cause any disruption to the flow of traffic in the busy downtown area.

Hon. Spencer Brand, Minister of Public Works in the Nevis Island Administration (NIA), praised the efforts of the PWD officials and road crew.

“Many thanks to the competent and hard-working Public Works Department crew. Thanks to Danny Williams [Operations Manager] for leading the charge and thanks to Director Jevon Williams. You know what the mission and vision is and we will get it done,” he said.