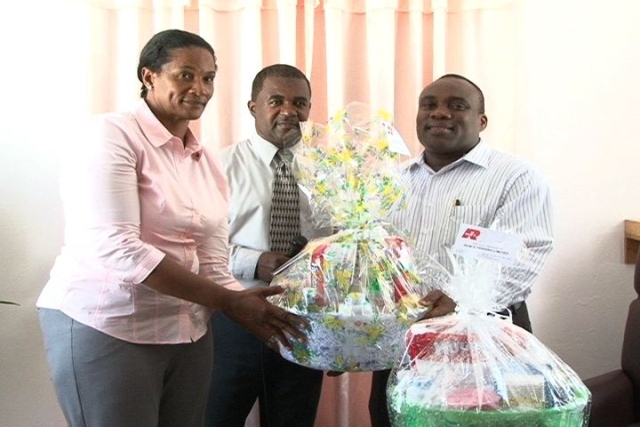 (L-R) Rams Group of Companies Representative Ms. Shirley Julius presents baby hampers to Medical Chief of Staff Dr. John Essien while Acting Hospital Administrator Mr. Johnson Morton and Matron Aldris Pemberton Dias (out of photograph) look on
NIA CHARLERSTOWN NEVIS (September14, 2012) — In the spirit of the 29th anniversary of Independence of St. Kitts and Nevis, the Rams Group of Companies made a donation to the Alexandra Hospital of two baby hampers for the first babies born on both National Heroes Day and Independence Day.
In a brief but significant handing over ceremony at the Matron’s Office on September 10, 2012, the Company’s Representative Ms. Shirley Julius spoke of the company’s civic duty.
“On behalf of the Managing Director of Rams Group of Companies Mr. Kishu Chandiramani, we wish once again to hand over to the Ministry of Health in Nevis two baby hampers to be given to the baby born on September 16th that’s National Heroes Day and on the 19th Independence Day.
“We at Rams Group of Companies believe in giving back, that is one of our mottos and so this morning, as the Health and Beauty Brand Manager, I am very pleased to hand over to the Ministry of Health, Dr. Essien and Nurse Dias two hampers which we are very pleased to give back to our community in Nevis,” she said.
In response to the gift, Acting Hospital Administrator Mr. Johnson Morton thanked the Rams Group of Companies and spoke of the Nevis business community’s support for the Alexandra Hospital.
“On behalf of the Alexandra Hospital and staff we would like to thank the Rams Group of Companies for these two wonderful gift baskets and they will be going to two lucky recipients. I am told this is an ongoing annual thing, so we would like to thank you very much.
“I can’t help but be inspired by the continued support of the Nevisian business community and again this is just another example of that support. So again we would like to thank you very much for these baskets and look forward to your continued support,” he said.
Medical Chief of Staff Dr. John Essien who received the gift baskets on behalf of the Hospital also added his thank you.
“On behalf of our patients especially as gynaecologist I would be attending to the two ladies who would be fortunate enough to receive these gift baskets. I want to say a big thank you to the Rams Group of Companies and to their representative Ms. Julius for this wonderful present,” he said.
Also present was the Hospital’s Head Nurse Mrs. Aldris Pemberton Dias.