Mr. Woolward a retiree and the first of one of two sets of twins borne by his mother, visited the Department of Information on July 18th with a twinned Amory Polly mango, the second one he had harvested in two weeks from his seven year old tree. It was the tree’s second harvest.

“I found another twin two weeks ago but this one I found it yesterday I was picking some mangoes and I happen to see this one so I decided to let the folks know because it is very rear you see these kind of things so I just decided to come and share it with folks.

“When I saw it because I saw the one before I was excited, I know that there are other fruits other plants that do bring forth twins because I plant a lot in my yard. I have bananas that I plant and I got twins as well, I plant carrots and get twin and various other fruits and plants. My mother has two sets of twins and I am the first with a sister and my last brother and sister they are twins as well,” he said.

He said in his excitement, he decided to share the news with some persons in the community and took the unusual looking fruit to a supermarket before taking it to the Department and the reaction was one of disbelief.

“I am very excited that’s why I am here to share. I took it to Best Buy last night [Monday] because I picked it yesterday afternoon and when I showed folks they were elated, they opened their eyes. ‘Oh Mr. Woolward!’ some folks who can’t believe said, ‘Is that true? Mango bearing twins now?’” he said.

The Ramsbury Resident added that he had also received remarks from other who referred to the twinned produce from his backyard garden as “his twins”.

“So when I show some of the folks they say ‘Mr. Woolward you got twins I say no I don’t have any twins I have three children none of them are twins, these are my twins from my planting’.

Well I don’t know if any of my children or grand children or great grand will come along with twins but… my twins are bearing fruit from my plants,” he smiled.

Notwithstanding, Mr. Woolward attributed those occurrences to nature and was nothing more than God’s work.

“It is God who creates everything and he has the situation of knowing how to do things. I think it is a natural occurrence but it is just that for the first time I have ever seen it [twin mango] in all my life. I am 61 years right now and it is the first time in my life. I have shown it to folks who are much older than me and they say they have never seen anything like this when it comes to the mango,” he explained.

A pleased Mr. Woolward left the Department with the hope of savouring the fruit from his garden. He noted that he had already taken it to the Agriculture Department and they had expressed interest in preserving the next twinned Amory Polly fruit from his tree and took a photograph to document the find.

The Retiree also used the opportunity to encourage others to take the advice of the Agriculture Officials on Nevis who have continued to pursue persons to engage in backyard farming.

“I would say once their yard is fenced, I know some people love flowers, yes beautify your front but once you have yard space otherwise use it for gardening you can’t go wrong on that,” he said. 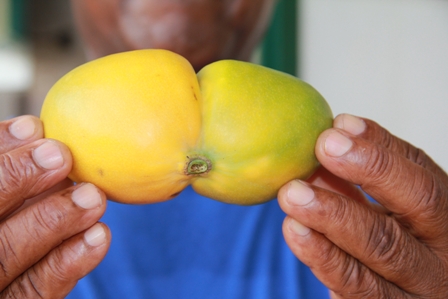 According to Mr. Woolward, his health had also benefitted from his passion for farming which stemmed from his childhood days.

“I do my back yard gardening all the time. I love farming, I was raised on an estate farm in St. Kitts. My parents did a lot of farming and I love farming I love the earth. I love to plant and see my plants grow and bring forth fruit.

“I love lots of fruit probably that’s what have me looking so well because I eat my fruits and my greens [and] that has caused me to be strong. Right now I am feeling healthy with no pains or anything. I am doing well as a retired person and I am enjoying my retirement,” he said.