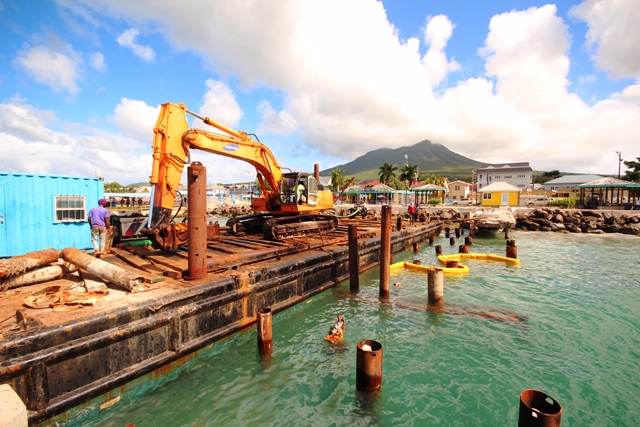 Workers from St. Kitts Marine Works replacing piles for the refurbished tender pier at the Charlestown Port on January 08, 2020

NIA CHARLESTOWN NEVIS (January 09, 2020) — Mr. Regiwell Francis, Chief Executive Officer of St. Kitts Marine Works, says construction work continues on the tender pier at the Charlestown Port in Nevis in spite of the challenges posed by the surging waters of the Caribbean Sea at this time.

His comment came on January 08, 2020, when he gave the Department of Information a status update of the refurbishment project undertaken by the Nevis Island Administration (NIA).

“We have been having a lot of problems with the sea today; the water is surging, the barge is bouncing. We have actually lost work because the barge has been hitting the work that we put up, and until the piles are tied in they are very vulnerable to get hit by the barge and get knocked over but working through we are looking at maybe about two more weeks to completion.

“We are very excited to get this project done and hand it over to the people of Nevis,” he said.

The NIA had contracted the marine company to reconstruct the intermediary section of the pier which had been deteriorating over the years.

The CEO explained that during the demolition process they had encountered advanced deterioration.

“The section that we demolished was really, really terrible. What happened is the concrete piles holding the pier up, they were down to the size of my finger in some cases. The pier would have fallen down at any time.

“Actually for demolition we were not even allowing any of our men to go underneath because it was considered extremely not safe, so we had to actually demolish the pier down into the water and then break it up underwater and then take it out in pieces,” he said.

Debris from the three-day demolition was relocated elsewhere in the ocean to create a haven for fish and lobsters to breed in.

Since physical work commenced on the site more than a week ago. Mr. Francis explained that they have been able to drive piles into the sea bed and were in the process of putting on the caps. Following that process would be the framework of the pier. Slabs joining the pier together would be placed. At that point they would put the steel work and then cast all together, from one end to the next.

In response to whether there are any changes in the new design, the St. Kitts Marine Works official noted that there would be, to accommodate smaller vessels and better public access.

“We have some substantial changes actually. The management decided they wanted the pier a lower level to more accommodate the dinghies and the smaller boats. So the section I’m putting in is going to have a ramp coming down from the entrance. It’s almost about the height of the low ramp on the side where the ferries use and it’s going to remain on that level and then come back up a steady grade on the other side. So wheelchairs will have easy access, vehicles could drive down back and forth, and you will have that low area on both sides so you will have a lot of berthing facility,” he said.

Meantime, the project will benefit the local economy. Mr. Francis stated that instead of having the concrete work done in St. Kitts, material was sourced in Nevis and local contractors utilised.

“We are just happy to perform and show that locals could do it. It’s always good to keep the money in the economy, and I’ve decided to give some business over here to Nevis instead of doing everything in St. Kitts and bringing it over.

“Some of the businesses we have worked with are Oualie Masonry Products. They provide the concrete. We buy the steel from over here at Horsfords. We also use Ricki Construction. He’s handling the labour force with the construction, tying in the steel and the pre cast. It is done at Cane Gardens. All that was done here in Nevis,” he said.