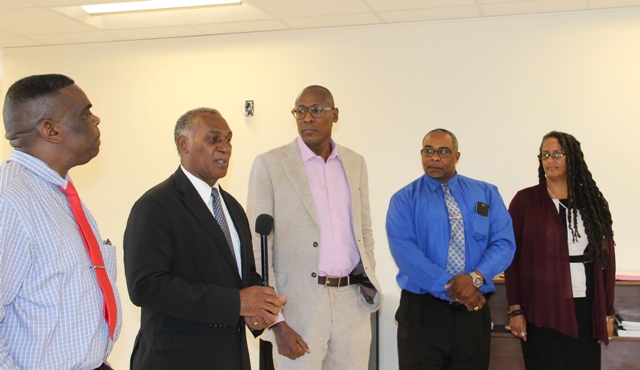 In the case of Nevis, he said the island has a high density of cultural artefacts particularly built heritage and the planned possibilities associated with historical personalities such as Alexander Hamilton. He also pointed to the festivals on offer in St. Kitts and Nevis.
Mr. Amory, in brief remarks welcomed Dr. Nurse to Nevis. He said his visit was an important one because it would help to refocus the minds and attention on the importance of the island’s cultural heritage and their benefits to the country and its people.
The Premier said the Nevis Island Administration (NIA) welcomes the National Cultural Policy. He expressed hope that the people of Nevis would buy into the importance of culture, what it means to them and the benefits that could be derived from it in the long-term.
“We welcome this initiative. I think it will bear great and long-lasting fruits for us because we need something which will drive us to the next level and I think, culture and cultural involvement and recognition has the potential to do that,” he said.
Also present at the meeting were Antonio Maynard, Secretary General of the St. Kitts and Nevis National Commission for UNESCO, Jerome Rawlins, Chief Executive Officer of the NCDF and Marlene Phillips, Research and Documentation Specialist at the St. Kitts Department of Culture.