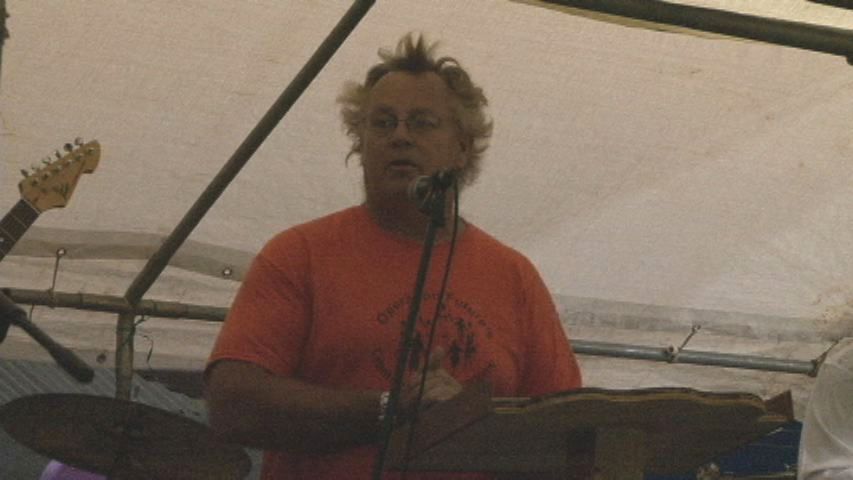 Member of Operation Future Mr. Dan McMullen
NIA CHARLESTOWN NEVIS (October 29, 2013) — Dan McMullen, a member of Operation Future believes that rehabilitation should be a community effort and not solely the business of correctional institutions.
His comment came when he delivered brief remarks at the official opening of the Creative Youth Academy, a partnership with the Nevis Island Administration (NIA) at Cotton Ground Village on October 26, 2013. The project involved the renovation of a dilapidated building formally used as a police station for the parish of St. Thomas’ to a facility which will feature an audio/video recording studio, a band room that would also be used as a classroom, activity room, counselling and meeting room. The project took four months and was done with the assistance of inmates at the Prison Farm at Maddens.
“We often talk about rehabilitation and one of the things that I find is that when we talk about rehabilitation, we always talk about the people that offend. To me, rehabilitation has to include the community.
“If we continue viewing somebody who makes a mistake as a product of their mistakes, they are never going to get a chance. So these gentlemen got involved in the project and demonstrated that they are far greater than the sum of their mistakes and I am proud to include them as basically part of my extended family,” he said.
He explained that the project which had been a dream of the organisation’s President Mr. Lawson Percival for eight years, had drawn support in cash, kind and physical help was one step closer to Operation Future’s restorative justice.
“We often talk about this being a new programme and in fact Operation Future has had a dream of restorative justice and this is just one part of that dream. Restorative justice views crime as a symptom of the disease, not the disease itself and the disease is an illness in the community.
“One of the biggest things I have been faced with here, is people come to me and say ‘how do you engage the youth, they are not interested?’ and at Operation Future we have found it’s not the youth who are difficult to engage, it’s the adults,” he said.
Mr. McMullen explained that the island’s youths had found favour with the gang culture because it was about family and acceptance but the Academy would begin to provide that in a positive fashion.
“One of the reasons we talk about the gang [is] because it is all about family. It may be a dysfunctional family but it’s a family nonetheless.
“Young men get involved in the gang culture because they are looking for a family; they are looking for acceptance and they are looking for recognition and we have to start giving that in a positive fashion and that’s the goal of this facility,” he said.
Meantime, Area Representative Hon. Joseph Parry gave his blessing to the project and spoke to his difficulty with the emerging gang culture in St. Kitts and Nevis.
“The biggest problem for me is the gang problem that has sprung up in Nevis and St. Kitts and I really feel that we needed some activities to occupy some of these young people, the males especially and those activities would go a long way in helping us to solve that problem.
“I have never believed that locking up or incarcerating people is a long term answer that answer can only go for a few persons. What we need to do is to rehabilitate our people and make them feel part of the society,” he said. 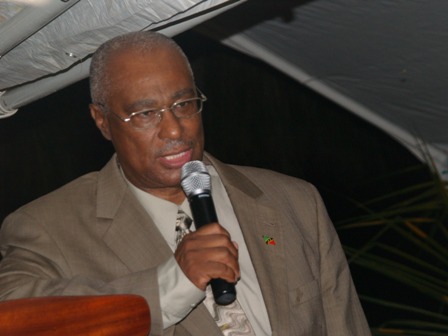 According to Mr. Parry, it was often found that those who joined gangs had experienced some difficulty in their formative years.
“Quite often when you check these young people, they have had some frustration in their young lives – broken homes, separate parents, parents not acting as parents – quite a number of things and I believe basically, they have found refuge in gangs because they feel they have found a family; they feel they are welcome.
“Well we want to express to them and  let them know, that quite often the young guys who get into these gangs live no longer than 25 and 30. That is their life span and then they are taken out one way or the other. We feel if we can encourage them to move in another direction, if they can be creative in our society they can live far longer… I feel that they have a lot of talent many of them are smart people coming from homes where the girls have done extremely well,” he said.
Mr. Parry said he was hopeful people from throughout the island would support and participate in the Academy.