NIA CHARLESTOWN NEVIS (November 12, 2012) — Permanent Secretary in the Ministry of Agriculture on Nevis Dr. Kelvin Daly believes that the reintroduction of sweet potato and other traditional staples to the diet of Nevisians would help the island in its bid to secure food security.

Dr. Daly made the comment in an interview with the Department of Information, on November 9th, 2012, during a sweet potato workshop hosted by the Department of Agriculture in collaboration with the Taiwan Technical Mission at Cades Bay.

“We are encouraging farmers to talk with us and see where they can fit in the programme of sweet potato production because it is never enough. There is a big gap between supply and demand and we are nowhere supplying that demand right now. We need at least about 15 to 20 acres continuously under cultivation. We have about half [of]that but it’s a long way from where we were in 2006 when we had less than one acre but we are moving in the right direction.

“We are also looking at cassava, we are looking at yams and we are looking at plantains and bananas as those targeted crops to introduce those staples back into the diet. As food prices go up for imported rice and wheat, soybeans and those kind of things, we have to make sure we are positioned in an arena that gives us a good chance of providing food for Nevisians to eat at a fair price,” he said. 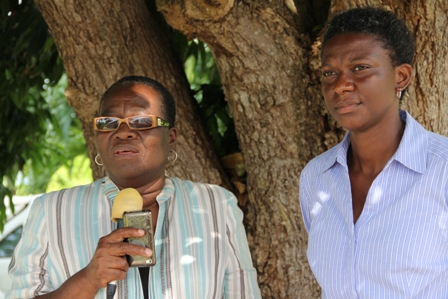 According to Dr. Daly, the workshop was aimed at providing clarity to staff at the Department of Agriculture and farmers as to how sweet potato could be reintroduced in a manner that was profitable to farmers.

He explained that there were four varieties being researched at the Mission for different characteristics from skin colour to the colour of the potatoes, their taste and texture for different uses and methods of pest control.

The Permanent Secretary further explained, that as the world was moving further toward improved food security, Nevis had to move in the same direction and had the capability to do so once Nevisians moved away from the westernised diets and returned to a greater consumption of traditional staples which could be produced locally in abundance.

“This is something we can produce here on Nevis in abundance. Since 2006 we have increased the acreage from less than one acre to up to 10 acres per year and we are still nowhere near satisfying the market.

“We are introducing varieties that come in sooner so most of the varieties that are under test are three month varieties, you don’t have to wait a whole six months or seven months like the old varieties for a crop every year,” he said. 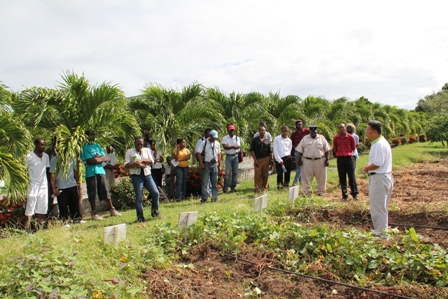 Meantime, Country Representative for the Caribbean Agricultural Research and Development Institute (CARDI) Ms. Pathleen Tutis noted that the organisation had been working with the department of Agriculture on Nevis on sweet potato production particularly in the area of pest control and have had some positive results which had been shared with farmers.

Nonetheless, she said it was heartening to see that the Taiwanese had new varieties which they wanted to introduce in addition to those CARDI had already introduced and others they planned to bring in the future.

“Sweet potato is one of those that we look at to be climate resilient, particularly in times of hurricanes. We know how sweet potato bounces back. So it is a very important crop to the Federation and CARDI is going to continue working along with the Department and the Taiwanese in controlling the pest and introducing varieties on St. Kitts and Nevis,” she said.