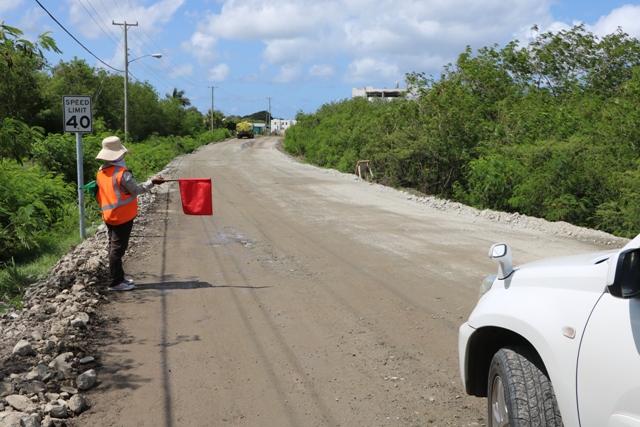 A flag lady with Surrey Paving & Aggregate Co. Ltd at work on the Island Main Road Rehabilitation and Safety Improvement Project on August 13, 2019

NIA CHARLESTOWN NEVIS (August 16, 2019) — An official of Surrey Paving & Aggregate Co. Ltd, contractors for Phase 1 of the Nevis Island Administration’s (NIA) EC$6.7 million Island Main Road Rehabilitation and Safety Improvement Project from Cotton Ground to Cliff Dwellers is urging motorists to adhere to the traffic instructions given by the flag persons on the project.

Mr. Mark Rhomes, the company’s Quantity Surveyor who was standing in for Mr. Michael Harrison the Project Manager, made the appeal when he spoke to the Department of Information on August 13, 2019.

“We need motorists to obey the flag people because it is for the workers’ safety and their safety as well…We are actually using two-way radios so you might be around a corner, the flag person will know exactly what is coming up and then relay that to the other flag person at the other end…

“We turned the roadway into one way. At any section where there are flag people it’s usually a one way so if they disobey a flagger at one end they will run into traffic at the other end and can cause an accident which would be unsafe for everybody for the motorist band or workers as well. So we just urge people to obey the flag people,” he said.

The company has employed two flag ladies among its team of flaggers for the project. Mr Rhomes stated that the move is an attempt to get women involved in construction and it is an area they are most suited, with less stress as opposed to manual labour and the training is not difficult.

One of the flag ladies Ms. Loretta Greene Phillip who has a Guyanese accent noted that apart from some drivers ignoring the road instructions, she has been subject to insults.

“Most of the drivers not dealing with us the right way. When we put up the red flag they passing us. Some of them rude, even police, even soldiers. They know the rules and they ain going with the rules…

“The road is not for one body alone; it’s for the whole of Nevis. If ministers could stop, magistrates could stop, these others could stop. We pleading to them work along with us… Everybody want a nice road but all we ga do from 7 o’clock on de road to 6 o’clock is not easy, and in the hot sun but some of them doh want to hear. Some uh dem feel they bigger than you… We done take down some names already and we gonna…report it to the station, you understand, because it is unfair to us,” she lamented.

Meantime, Hon. Spencer Brand, Minister of Communication and Works in the Nevis Island Administration (NIA) added his voice to the call for motorist’s cooperation with the flag ladies.

“I want to use this opportunity to continue to appeal to the motorists to drive with due care and attention in this area from Cliff Dwellers to Cotton Ground but more particularly, to kindly respect the instructions of the flag ladies. They are placed there for a very important reason and that is to ensure safety in the area where the contractors and in particular heavy equipment are operating.