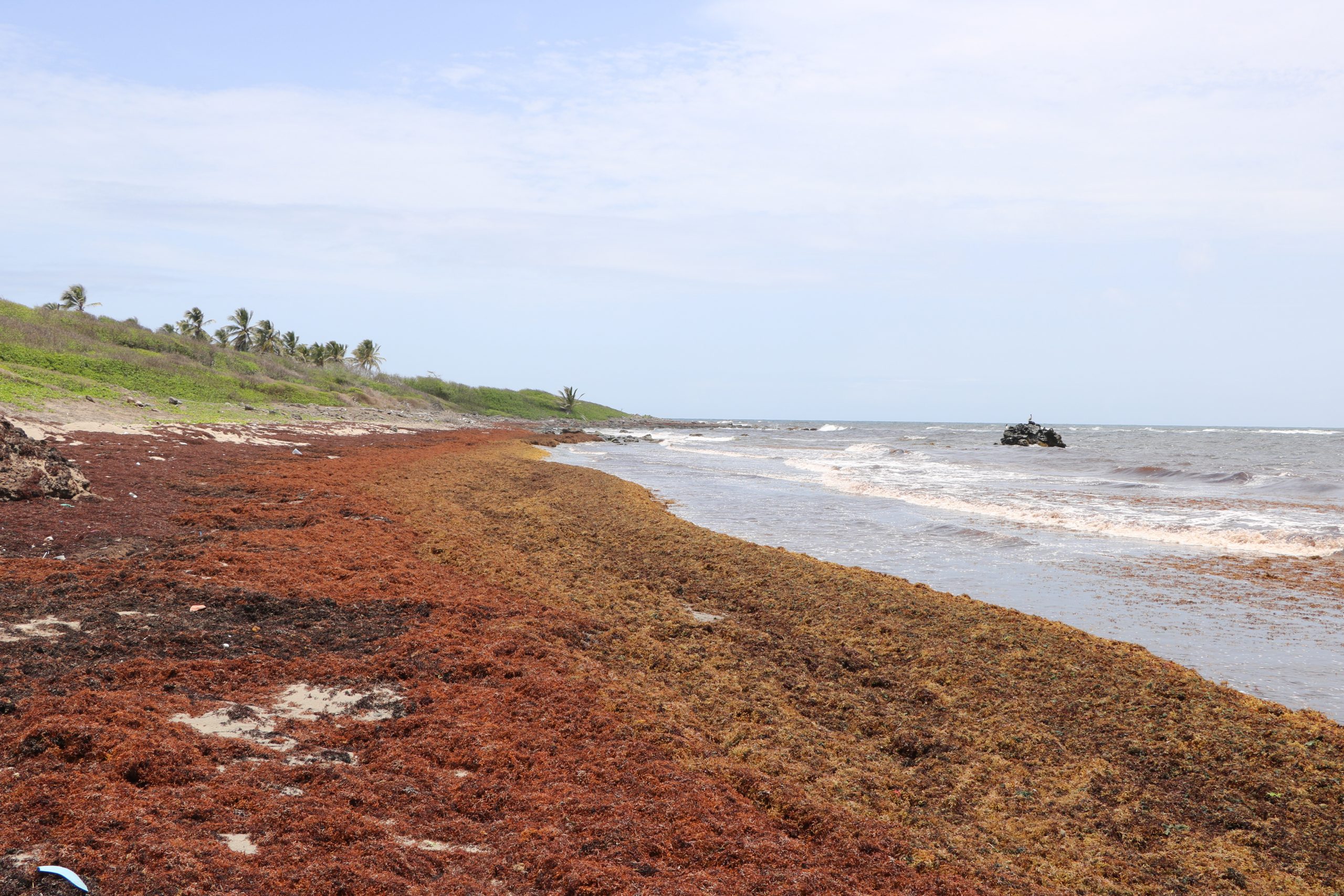 Sargassum seaweed lining the shores of Indian Castle Bay in Nevis on August 11, 2021

NIA CHARLESTOWN NEVIS (August 11, 2021) — The influx of sargassum, a brown seaweed with berry-like air bubbles, is causing havoc on the fishing industry in Indian Castle and other parts of St. Kitts and Nevis.

Mr. Stephen “Mackie” Moore, President of the Indian Castle Fisherfolk Association, gave an account of the impact of the sea weed on the fisherfolk in Indian Castle, an area in Nevis known for its thriving fishing grounds.

“It has impacted us negatively especially in recent times. As everybody would know this is the gateway to one of the best fishing grounds in Nevis and it is one of the very few areas in Nevis that you would require a vehicle to pull you from the sea after you’ve finished your voyage, and that has become very difficult especially when you have a large influx of sargassum… It is compounded by the fact that you cannot plan too far ahead since we have the influx of sargassum…

“It’s difficult for those who ply their trade from the shore. It is difficult even for our group who has a fledgling seamoss industry. The sargassum has reaped havoc on us really. We have lost three plots to sargassum coupled with COVID, and so it has done untold damage to the industry, and you factor in the difficulty getting to the sea, the risk of your prop getting caught in the sargassum, the safety issue because the sargassum makes the area around the shore very dark which is a ground for sharks and all that and so it’s difficult on many levels,” he said.

The seaweed, which originates from the sea between Brazil and West Africa, has also been affecting the fishing communities on the island and is normally more intense in the summer months.

Mr. Moore added that in July the influx of the sargassum was the worst he has seen in the area. The association sought assistance from the Nevis Island Administration to clear away the sea weed in an effort to offer fishers in the area temporary access for fishing for at least one day.

“The best way to deal with sargassum is to wait it out but while you wait it out it was again negatively affecting the livelihood of fishers, so to expedite things we got the government involved in the way of backhoes and excavators… We cleared the area.

“We know that was just a temporary fix just…to bridge that gap for the fishers that it would have their livelihood attended to but we know it was not a long-lasting solution but, yes, they assisted us in clearing the area. It took almost a week to get it together actually, so at least you could get a day fishing,” he said.

Meantime, a press release dated August 10, 2021, issued by the St. Kitts and Nevis Information Service (SKNIS) indicated that the Ministry of Agriculture, Fisheries and Marine Resources in St. Kitts is currently in the process of researching the possibility of utilizing the sargassum sea weed for fertilizer and animal feed.

The release quoted Dr. Marc Williams, Director of Marine Resources in St. Kitts, as saying that most of the sargassum which arrives in St. Kitts and Nevis is due to the increases in atmospheric temperatures and the nutrient enrichment in the ocean.

He said prior to 2012, the sea weed acted like a fish aggregating device and fishers used it to catch mahi-mahi, skipjacks and other pelagic species but that has changed.

“What we have seen since 2012 is that the sargassum seaweed is coming in a large abundance which has prevented fishers from going to fish as well as creating a lot of health issues for the communities that are affected by it,” Dr. Williams said.

In St. Kitts and Nevis, the communities on the Atlantic which are affected by the influx of sargassum are Indian Castle, Long Haul Bay, Herberts Beach in Nevis and Frigate Bay, Keys, Cayon, Tabernacle, Saddlers, Parson’s Ground, and Dieppe Bay in St. Kitts.

Dr. Williams used the opportunity to advise persons in the Federation to refrain from using the seaweed as food because of its high arsenic content.