CHARLESTOWN NEVIS (June 24, 2010) — Sea turtle conservationists on Nevis announced recently that they had successfully retrieved a satellite tracking device from a female sea turtle named Ginger. She had been named and tagged three years earlier in programme which involved the Four Seasons Resort, Nevis, the Caribbean Conservation Association and the Nevis Turtle Group.

President of the Group Mr. Lemuel Pemberton made the disclosure recently and registered elation when members of the group found Ginger who had returned to nest at Jones Bay.

“The persons at the Caribbean Conservation who have been tracking the turtles told me that Ginger which we tagged in 2007 was heading back to Nevis and I could go on the beaches and check to see if I can get a transmitter from Ginger, since it has been transmitting for three years now, we actually know where its foraging grounds are so we can probably retrieve the satellite transmitter and maybe attach it to another turtle…

“It was a good feeling to know that we have been doing a job that has helped us to know what the sea turtles that nest on Nevis do, what is their behaviour between the time that they nest so it is really a good feeling to meet the turtle on the beach and to actually retrieve the transmitter,” he told the Department of Information. 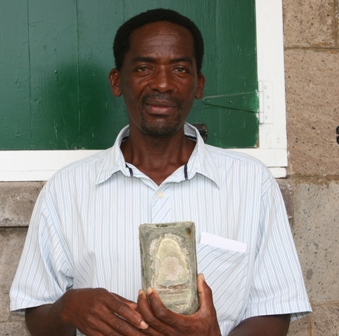 President of the Nevis Turtle Group and Director of Fisheries in the Nevis Island Administration Mr. Lemuel Pemberton displays the satellite tracking transmitter retrieved from Ginger

According to Mr. Pemberton, who is also the Director of Fisheries on Nevis, tracking devices had been attached to Mango and Nevis in 2006; Calypso and Ginger in 2007 and Sunshine and Hibiscus in 2008.

He explained that according to the data collected, Ginger had been foraging in the area of Redonda and Montserrat and had reached depths of 200 meters. The tagged turtle travelled a distance of about 1,000miles around both islands before returning to Nevis and it transmitted data for the longest among the other turtles tagged in the programme.

“This sea turtle has been transmitting for the longest of all the sea turtles that we have tracked on Nevis for three years and this has been a very long time. Normally with these transmitters the batteries would last for maybe six months to a year but this one has lasted for a remarkably long period.

“So we decided to go out and see if we could retrieve it and we did and now we have the transmitter here. The aerial is missing and there has been some corrosion from the salt water and some abrasion from the turtle rubbing against rocks but it is still in pretty good condition it is still being tracked by the persons at the Caribbean Conservation Association,” he said.

Mr. Pemberton also noted that the retrieved transmitter would be sent to the United States of America, where it would be refurbished and used to track other sea turtles.

Meantime, Mr. Pemberton said the turtle conservation programme on Nevis continued to do well and pointed to the assistance and support given to the programme by the Nevis Island Administration (NIA).

“The Nevis Island Administration has always supported sea turtle conservation. I get the opportunity and time to go out on the beach during the evening and that would mean if I am on the beach up to 3 o’clock I would not turn up to work at the normal 8-4 job so I come in a little bit later… 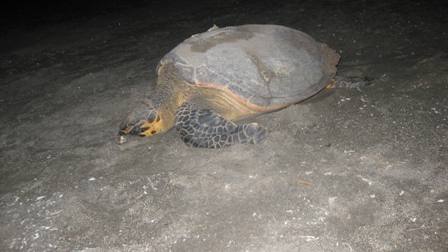 “Also they have provided logistical support in that when we need to conduct sea turtle camps, materials have been provided and they have helped with transportation and the use of the conference room at the Ministry of Agriculture. So we have really got support from the NIA as far as that is concerned,” he said.

In response to whether or not the work done with sea turtle conservation on Nevis had been recognised regionally or internationally, Mr. Pemberton noted that technical assistance had been received as a result of their efforts.

“Apart from the Caribbean Conservation Cooperation we have The Wider Caribbean Sea Turtle Conservation Network those two organisations have recognised Nevis and the work we are doing here and a number of persons have actually gotten the opportunity to go overseas to learn about sea turtles because of the work that we have done here.

“The Wider Caribbean Sea Turtle Conservation Network was instrumental in getting me in the first instance to Duke University in North Carolina and also myself and Craig David, who is with the group to go to Trinidad and Rene Walters and Charles Paris to go to Antigua. Also Joel Rene and myself went to St. Kitts on another workshop. So we have gotten some amount of recognition and have gotten opportunities for training in sea turtle conservation as a result of our work here,” he said.