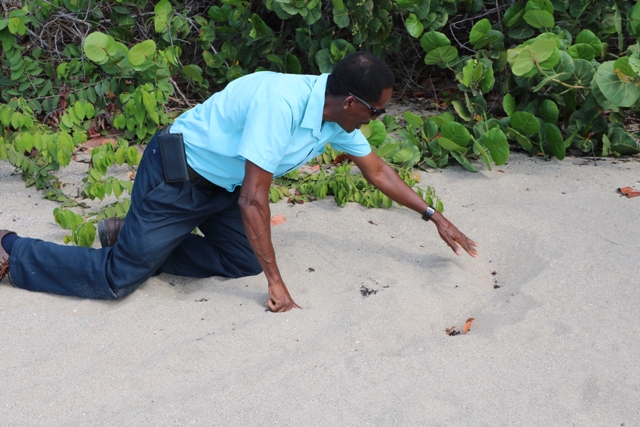 Mr. Lemuel Pemberton, Deputy Director of the Marine Resources Department on Nevis indicating, on August 13, 2019, the area where a nesting hawksbill turtle was made immobile by poachers and dragged off Cades Bay Beach days before

NIA CHARLESTOWN NEVIS (August 14, 2019) — Mr. Lemuel Pemberton, Deputy Director of the Marine Resources Department on Nevis continues to call on the public to resist the urge to poach nesting sea turtles on the island’s shores to help preserve the critically endangered species as listed by the Convention on International Trade in Endangered Species of Flora and Fauna (CITES).

The call follows a recent incident at Cades Bay Beach in which members of the Nevis Sea Turtle Group led by Mr. Pemberton, found evidence of poaching activity of a hawksbill turtle which was believed to be dragged off the beach under the cover of darkness from its nesting area.

“We want to remind people this used to be happening on a fairly large scale when we started doing this sea turtle conservation work, and that with public education, enforcement and increased patrols we were able to sort of reduce that, and we don’t really want this kind of behaviour to reappear because the species have not recovered yet.

“It will take many, many years because they [sea turtles] were many years under pressure. So there will be many years before they recover to as state that they can be fished again to the extent that they were when I was a youngster,” he said.

Mr. Pemberton explained that if sea turtle poaching continues, it would have a detrimental effect on the entire marine eco system in the area.

“We already have a small nesting population it will be reduced even more, and there is a critical connection with the wider marine eco system because the sea turtles are what we called a key stone species, and removing the key stone species from the environment, it is possible that the whole system would collapse.

“So you would probably see more signs of…a sponge infestation of the reefs… [the] hawksbill turtle’s…favourite diet is the sponge and without the hawksbill to basically eat the sponges the sponges will take over the spaces where the coral reefs are, and we will have a deterioration of the coral reef system, we will have a reduction in fish populations, we have a reduction in marine health, the health of the whole marine system. So it’s a whole domino effect if it starts here,” he said.

The senior marine resources officer reminded the public that if they are caught interfering with the sea turtles they would be subject to hefty fines at the Magistrates Court in keeping with the Fisheries, Aquaculture and Marine Resources Act, 2016.

St. Kitts and Nevis are signatories to CITES and the Convention on Biodiversity and as such is obligated to protect the endangered species and biodiversity for the use and enjoyment of present and future generations on the island.