Nevis seniors on the Scenic Railway in St. Kitts.

Charlestown, Nevis (Wednesday,November 7, 2012) — Active seniors on Nevis are basking in the glory of a just concluded action-packed Month of the Elderly 2012, whose activities came to an end on October 31st, with an excursion on the St. Kitts- based Scenic Railway.

According to the Coordinator of Senior Citizens Division, in the Department of Social Services, Mrs Garcia Hendrickson, the month was celebrated under the theme ‘Longevity, Shaping the Future’ and Nevis seniors had the best time of their lives with activities that kept them on their feet for the entire month.

The last activity, the tour to St. Kitts, brought down the curtains in a spectacular way when a 92-strong Nevis contingent left Nevis on the morning of Wednesday October 31 from the Long Point where they were greeted by the pleasant news that Captain of the ferry Sea Hustler, Mr. Winston Skeete was donating the round trip to St. Kitts.

Mrs Hendrickson told the Department of Information that the number was made up of 70-plus seniors, and the rest were community caregivers and nurses. She emphasized that the seniors had undertaken a similar trip last year, but this one, she said, “was much better”.

On arrival in St. Kitts, they were met by retired Supervisor of Social Services, Mrs Anne Wigley, who assisted, when the buses provided by the Department of Social Services could not carry all of them to Needsmust to board the Scenic Railway for the eighteen-mile excursion. 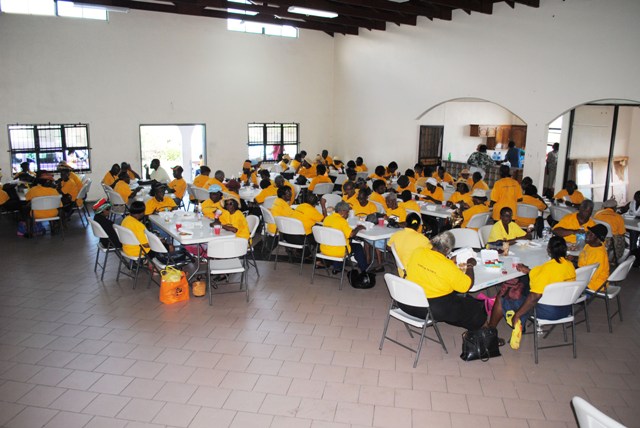 Taxi owner, Mr Lorenzo Herbert (T 1143), who has been a taxi driver for over twenty years offered to carry the excess seniors without charging them. He told the media that he offered to carry some of the senior citizens on his bus to the Scenic Railway terminal because “I love people.”

“Oh, my government is very good, Lord bless Mr (Hensley) Daniel, and all on his team and Mr (Joseph) Parry,” Ms Eglantine Duberry (82) told media in St. Kitts. “I wish I could go on it all day and night.  We are able to get away from boredom which is not good for the seniors, and all that because of Daniel. Before Daniel, we never used to have such excursions. No, Never!”

Another senior, Mr Lewis Wilkinson (75) said that meetings of seniors that have been made possible by the Nevis Island Administration had brought a lot of change in his life. He said that by being in the spotlight along with other seniors it has made him change his attitude to life.

“It helped me to give up some of my bad habits,” said Mr Wilkinson. “It made me be more disciplined in life. My intention is to live as an example for the youth. I want to say God bless Mr (Hensley) Daniel, and I wish, and I pray to God that the voters would do what’s right and return Mr Daniel back to office, because, it is because of him why we are here.”

Reflecting on the month, Mrs Garcia Hendrickson said that activities started on the first of October (a Monday) which is observed as the International Day of the Older Persons. The Division had lunch with the seniors at Occasions, which she said was extremely well attended.

“That luncheon was for as many seniors on the island who wanted to come, because we provided transportations from all parishes. The hall at the Occasions was almost full, and we had a mini-concert, and the Premier of Nevis, Hon. Joseph Parry gave the feature address,” observed Mrs Hendrickson.

“On 7th October, which was the first Sunday in the month we had the annual thanksgiving service at the Eden Brown Church of God. Every year we rotate churches and we chose the Eden Brown this year. It was well attended and the seniors participated with songs.”

Activities continued on the 11th of October with a movie evening, at the Cotton Ground Community Center, in place of an early advertised event. However, plans to go out between the period of the 15thto the 18th to visit seniors who are shut in were rained off following the passage of a storm, but some of the workers still managed to make visits.

While at the home they assisted the seniors with their breakfast, combing their hair, doing their nails, and some people played dominoes with them. The community caregivers cooked lunch, they served and fed them. They also made the beds, help put on their clothes and then afterwards assisted with the cleaning up.

“When we were leaving they asked when we are going to do it again, that we must do it more often,” said Mrs Hendrickson. “I promised them that we could consider making it like a quarterly activity. So for next year we will see if we can put that on the calendar, God willing.”

On 27th of October they held a grand concert at the Nevis Performance Arts Center, which was called ‘Bridging the Gap’ because it was a joint concert with the youths and seniors.

“From all reports, the concert was a hit. We had items where the seniors performed by themselves like the steel pan and we had joint items like the masquerades. It was really a wonderful night for everybody,” said Hendrickson. “People were kind of amazed at the ability of the seniors at their age. And even those who said poems were able to do so without reading.”

Also attending the concert was the Hon Joseph Parry who presented a fruit basket and certificate to Ms Alice Nisbett who celebrated her 92nd birthday on the same day. The fruit basket was donated jointly by TDC City Drug Store- Nevis, and the Social Services Department.