Deputy Governor General of St. Kitts and Nevis His Honour Eustace John addressing officers of the St. Christopher and Nevis Police Force Nevis Division at their annual Independence Day toast on September 19, 2016, at the Cicely Grell Hull-Dora Stephens Netball Complex (File photo)
NIA CHARLESTOWN NEVIS (May 02, 2017) — Deputy Governor General in St. Kitts and Nevis (SKN), His Honour Mr. Eustace John, CMG, has retired. He demitted the office as of April 30, 2017.
The Deputy Governor General, informed His Excellency the Governor-General, Sir Tapley Seaton G.C.M.G, C.V.O, Q.C, J.P, of his request to retire from the position he held for the past 23 years in a letter dated 25th January, 2017.
On January 31, 2017, His Excellency the Governor-General expressed his appreciation to Mr. John for his service as Deputy Governor-General for Nevis from 1994. He also conveyed to him and his wife best wishes for the future during what he deemed a well-deserved retirement. 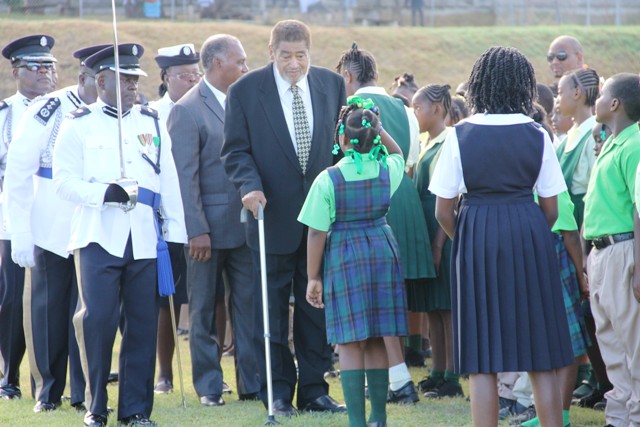 His Honour Mr. John, has a distinguished record of public service in both St. Kitts and Nevis and has contributed significantly to the Federation’s national development.