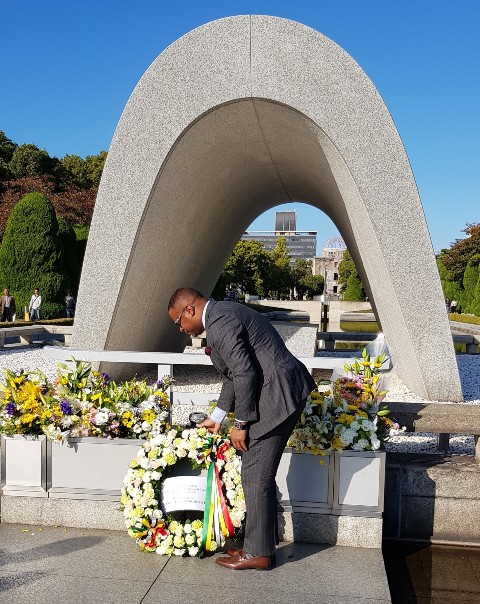 Hon. Mark Brantley, Minister of Foreign Affairs and Aviation in St. Kitts and Nevis lays a wreath at the Hiroshima Peace Memorial Park in Hiroshima City on November 03, 2018

November 05, 2018 (Ministry of Foreign Affairs) — Following on the heels of very constructive meetings with high-level officials of the Government of Japan, Hon. Brantley, Minister of Foreign Affairs and Aviation in St. Kitts and Nevis visited the Hiroshima Peace Memorial Park, in Hiroshima City on November 03, 2018, where he signed the visitor’s book and laid a wreath in honour of the thousands of lives that were lost after the world’s first atomic bombing on August 06, 1945.

Prior to the laying of the wreath, Minister Brantley had the opportunity to tour the Hiroshima Peace Memorial Museum where the horrors of the detonation of the nuclear bomb were fully displayed.

The museum contains and exhibits the belongings from the victims and offers a glimpse of life before and after the bombing.

Mr. Kenji Shiga, Director of the museum who conducted the tour stated that the world should never forget the horror that was inflicted on the people of Hiroshima in 1945.

St. Kitts and Nevis continues to support the efforts in international fora to bring about the total elimination of nuclear weapons for a more peaceful and safer world.