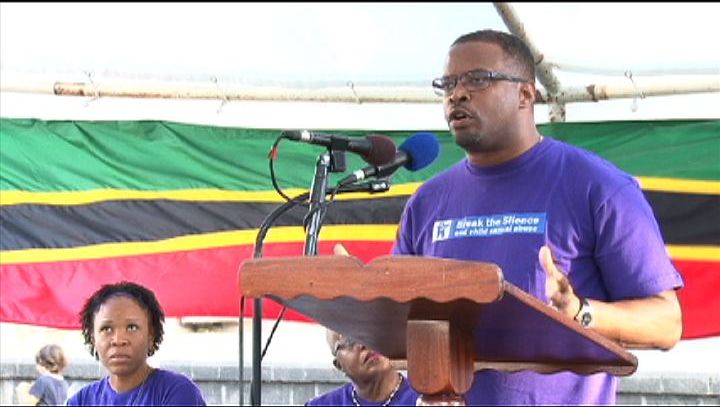 Deputy Premier of Nevis and Minister responsible for Social Services in the Nevis Island Administration Hon. Mark Brantley delivering a spirited address at the Child Abuse and Gender-Based Violence Rally at the Memorial Square in Charlestown on April 17, 2013

NIA CHARLESTOWN NEVIS (April 22, 2013) — Deputy Premier and Minister responsible for Social Development in the Nevis Island Administration (NIA) Hon. Mark Brantley in a spirited address expressed concern and lashed out at women in the community who were prepared to cover up the criminal act of child sex abuse for their benefit.

The Minister was at the time delivering remarks at the launch of A Child Abuse and Gender-Based Violence Rally on April 17, 2013 at the Memorial Square in Charlestown. The event, which will be conducted in other parts of the Caribbean, was hosted by the United States Embassy to Bridgetown and the Eastern Caribbean, the United Nations Children Fund (UNICEF) and the Caribbean Women’s Association (CARIWA) in collaboration with the Ministry of Social Development, Gender Affairs Division in the Nevis Island Administration (NIA).

“I am very concerned and I have heard some comments made and a large focus on the men. Yes, it is true that the men are the ones who normally perpetrate these heinous crimes but I also want to speak to the women because a lot of times, the women cover up for the men.

“In a lot of homes the women know what is happening and they refuse to say. They say ‘This is my man, my boyfriend, my husband; they wouldn’t do that’ and so they cover up for what is happening in the home and I say that we may walk away with the mistaken assumption that it’s just men. I am saying it is not just men; it’s all of us; it’s the entire society,” he said.

Mr. Brantley who is also the father of two daughters noted that there were parents who allowed their children to bring home “gifts’ from unknown sources without question. He told parents the purported gifts were from men who were looking for something in return and when the children came home with what parents considered to be bounty, they should understand that there was a cost associated with it, a cost to them and to the Nevisian society.

“We have to fight this [child abuse] at every conceivable level in the home, in the community, in the church, in the schools. We have to condemn it and condemn it with one breath,” he said.

With regard to child sexual abuse, Mr. Brantley stated that there was a phenomenon experienced in Nevis where numerous instances of abuse had gone quiet after much hullabaloo because the parents of the victims got paid off [colloquially called make up de case] and everything stopped as a result.

The Minister used the opportunity to ask persons in the community to assist the Police with their duties.

“If men are prepared to go out there and perpetrate these heinous crimes against children then there ought to be no mercy for them and I am a man so I am not asking for any mercy. I am saying that if they are prepared to do that, then we in one voice should condemn it and parents who are even contemplating making up the case as we call it colloquially, I’m saying to them that you are doing a dishonour to your children because your children go on with the scars psychological and otherwise that is caused by abuse,” he said.

According to Mr. Brantley, abuse in the home took a number of forms though the rally focused on sexual abuse.

“There is also physical abuse. There is abuse which is mental in nature. I am simply saying that all forms of abuse should be condemned by us and we as a society must become a kinder, gentle place for our children and for everyone in our society.

“Nevis must lead the way. I am not surprised that they started in Nevis, Nevis is the first among equals. It has always been so and so you have started here in a small island,” he said.