NIA CHARLESTOWN NEVIS (JULY 23, 2015) — Premier of Nevis Hon. Vance Amory welcomed a delegation from the neighbouring island of St. Eustatius when they paid him a courtesy call at his Bath Hotel office on July 22, 2015. The team headed by Leader of Government Mr. Clyde Van Putten, was on the island to meet with Agriculture Officials and cement the bond both islands shared in the area of agriculture.

Van Putten was accompanied by Commissioner of Finance and Acting Governor of the Public Entity of St. Eustatius Hon. Astrid Mckenzie Tatem and Unit Director of Agriculture, Animal Husbandry and Fishery Anthony Reid.

Mr. Amory told the visiting officials he was pleased they could visit, even if it was for one day. He added that the cooperation both islands shared was something that should be encouraged.

The Premier also used the opportunity to welcome them to visit Nevis to experience the island’s Culturama Festival. He described it as the Caribbean’s greatest summer lime, like no other.

In brief remarks, Van Putten noted that his political party had been in office for the past three months and thought it would be useful, to introduce the new persons appointed to lead agriculture on St. Eustatius to their counterparts on Nevis. 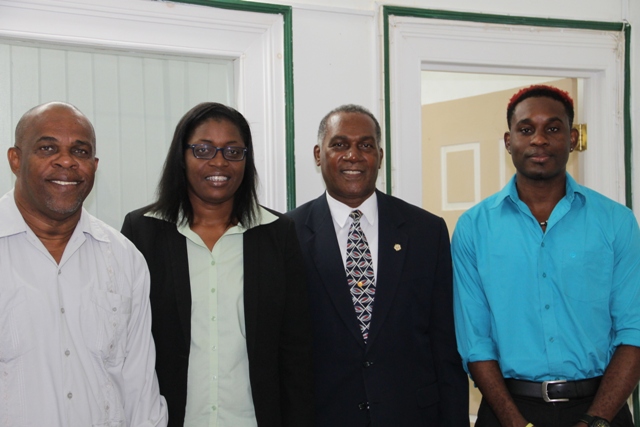 “We hope that during this term [in office], we will be able to reach more concrete agreements as to the different levels, not only in agriculture but of course in other areas, where our two governments and countries will be able to cooperate,” he said.

Meantime, the Acting Governor said revival of the agriculture sector was an area that was highlighted during the political campaign three months ago. She said the visit to Nevis would give them an opportunity to see what was taking place in the agriculture sector and where possible, implement them in St. Eustatius.

Director of Agriculture who has held that position for the last month, in brief remarks said the visit would help to place them in a position to benefit at all levels on what needs to be done in terms of developing agriculture in St. Eustatius.