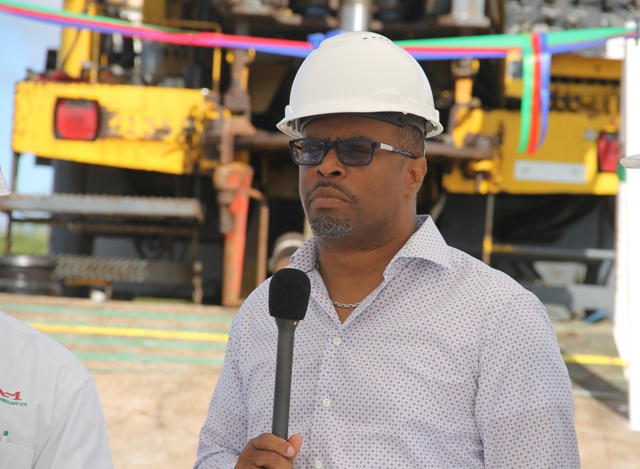 Acting Premier of Nevis Hon. Mark Brantley delivering remarks at a ribbon cutting ceremony at Hamilton Estate on November 22, 2017 to signal the start of a test well

NIA CHARLESTOWN NEVIS (November 22, 2017) — Acting Premier of Nevis Hon. Mark Brantley, says the significance of the start of drilling operations at the Hamilton site cannot be overstated because it is an exercise which has occupied the minds of governments on Nevis since 2004.

Mr. Brantley, was at the time delivering remarks at the Nevis Renewable Energy International’s (NREI) ribbon cutting ceremony at the geothermal site at Hamilton Estate, to signal the start of drilling operations for a test well on November 22, 2017. He said once success comes with having clean, green and cheaper energy from the island’s renewable resource would propel the island to a category of its own.

“If we can achieve what we intend to achieve here, it means that Nevis becomes fossil fuel free for its generation of electricity. It puts us really, in a category of our own in the Caribbean and perhaps in the world, in terms of being completely sustainable for our electricity supply…

“This is a resource given to us by God. It is a resource made available to us and it is for us now to harness that for the benefit of the people of Nevis,” he said.

The Acting Premier, acknowledged that Nevis was not alone in its quest for geothermal energy. He pointed islands pursuing geothermal energy including Dominica, St. Lucia, Montserrat and Guadeloupe which already has an existing plant.

He said the technology has been proven and it was now left for Nevis to move forward. He said while many are at the starting gate of geothermal development, Nevis was already quite a distance ahead.

Mr. Brantley, urged the people of Nevis to rally behind the project and to wish the drillers and developers the very best. “If they succeed, we succeed and if they succeed, we get cleaner, greener cheaper energy and that ultimately, is what is important to us,” he said.

The Acting Premier, who also stood in for Hon. Alexis Jeffers, Minister of Natural Resources and the Environment, noted that considerable progress has been made in the Nevis Island Administration’s thrust toward geothermal energy. He thanked all who have helped in the process financially and otherwise including the Sugar Industry Diversification Fund (SIDF), thermal energy partners NREI and the United States State Department.

Meantime, Mr. Brantley used the opportunity to speak of the six local residents employed by NREI to work on the first phase of the project and what the opportunity meant to them.

“We are going to have some transfer of skills. It means that six youngsters who are here will now know about geothermal, know about drilling and as we feel the rest of the Caribbean will take pattern from Nevis, it means that they will have a skill that is exportable and that in time, they themselves might be elsewhere working on drill rigs and working to make geothermal projects a reality elsewhere,” he said.