NIA CHARLESTOWN NEVIS (October 24, 2012) — At least one resident of Lower Stoney Grove openly voiced satisfaction with a project commissioned by the Nevis Island Administration, to correct drainage issues that have plagued the area since the island began experiencing heavy rains in recent years.

Mr. Dale Claxton who has been living in the vicinity of the Bath Ghaut at Lower Stoney Grove for many years, told the Department of Information at the end of a field visit on October 22, 2012, with Project Manager for Contractors Surrey Paving &Aggregate Co. Caribbean Ltd. Mr. Desmond Lewis and Premier of Nevis Hon. Joseph Parry, that the project was a blessing.

“I have been living here for quite a few years, 30 plus years and I know it is a major ghaut.  We normally get a few floods when the rain comes [but] what they are doing is a good thing because it [will] sort of help the people of Stoney Grove to be at ease and comfortable.

“A few years back a major flood flooded my mother’s property and other neighbours homes and vehicles got flooded. There is a lot of development going on in Nevis and stuff like that would cause more water to run on the land,” he said. 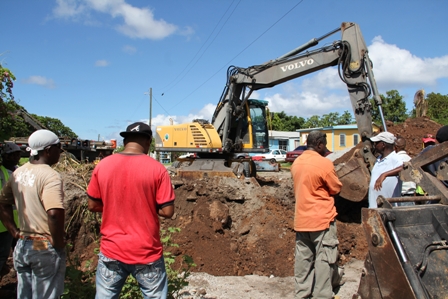 According to Mr. Claxton, the most recent flooding came with the heavy rainfall associated with the passage of Tropical Storm Raphael which skirted the Caribbean island chain almost two weeks ago.

“We had water on the streets up to almost four feet in height. It affected us because most of us here our vehicles and homes got covered in water.

“It is a good project. You don’t stop water or block it, you help it to escape. If you try to stop it you will cause catastrophe, death,” he said.

The project which commenced on Thursday October 18, 2012, will rectify major drainage issues that have affected residential areas in Ramsbury, Government Road and Lower Stoney Grove. The contractors said they planned to complete the project in four months.

“We started just last week Thursday and based on our projection, the project will last for four months. It started couple days ago and it will close on the 27th of February. All works should be completed by February 27th 2013. 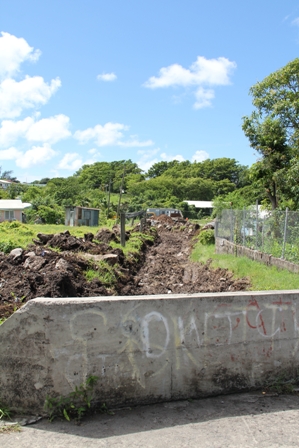 “Like any normal contract, the project has a six month warranty and the contract has responsibility to ensure that every aspect of the project is maintained for a period of six months,” Mr. Lewis noted.

He also stated that the project comprised of two components – drainage, the most costly, and construction of the Upper Hamilton road to the Alexandra Hospital.

“The drain starts at the bottom here (lower Stoney Grove) and leads all the way back to Government Road, that is on the eastern end and all of the preparation has to be done to ensure that work can start on Government Road around the 19th of November.

“About 4 to 5,000 cubic feet of material has to be moved for the entire ghaut. At the top section, there is going to be a holding chamber and that is to slow down the water that will impact the ghaut here. It is some form of retention because there is a lot of water coming down in the stream itself. What we have to do is slow down the velocity to ensure the water can flow or trickle out quite freely,” he said.

According to Mr. Lewis, based on the calculations the natural watercourse, one of two in Charlestown, could cope with a large volume of water but some remedial work with the use of concrete in some areas and boulders in others was required before more water was channelled to it.

“There has to be some remedial works done in the ghaut and we are in the process of starting that remedial work very soon because we believe it will protect the people of Ramsbury and the lower part of this area (Stoney Grove).

“You cannot put concrete at the lower side of the ghaut primarily because what it does is increase the flow of water and increase the volume of water. What you have to do is put more tropazedial type drain to reduce the flow of the water,” he said. 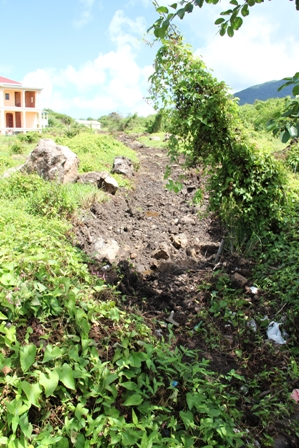 “We have to get the water off the town itself and into the pier drain but into the main stream. The stream has to be placed with boulders to prevent the speeding up of the water going down to the sea,” he further explained.

The Surrey Paving Official also pointed to a section of the Bath Ghaut across from the Caribbean Cove boundary and retaining wall which he said would require boulders to help protect properties on the northern side along the waterway.

During the tour further up the Bath Ghaut towards the Nevis Water Department Depot on Pump Road Mr. Lewis noted that although remedial work there did not form part of the contract they had intended to utilise their resources to place boulders along the ghaut to assist in the protection of those properties there.

Under the project the current bridge at Lower Stoney Grove would be demolished and replaced with one better suited to accommodate the water that would be channelled to the Bath Ghaut. 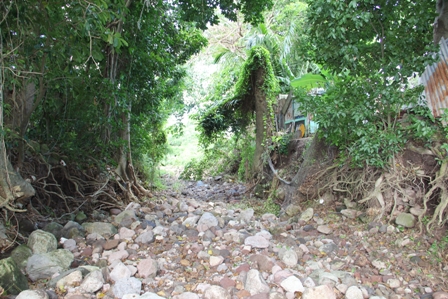