NIA-CHARLESTOWN, NEVIS (MARCH 4TH, 2011) — Two of Nevis’ top government officials, the Honourable Joseph Parry and the Honourable Hensley Daniel, have joined corporate entities in recording their support of the 2011 Literary and Debating Society of the Nevis Sixth Form College.

Mr. Parry, who holds the posts of Premier and Minister of Education in the Nevis Island Administration [NIA], joined the 22-member team at the Vance W. Amory International Airport, last week, where he encouraged the members to “perform at their highest potential.”

The team, described then as “a group of lovely, young, smart, bright adults” by Premier Parry captured the first place award in this year’s Leeward Islands Debating Competition in Tortola.

Upon hearing the news, the education minister on Monday [Feb. 28] sent a five-member contingent from his Cabinet and government: Deputy Premier the Honourable Hensley Daniel, Junior Minister in the Ministry of Communications and Works the Honourable Carlisle Powell, Cabinet Secretary Mr. Ashley Farrell, Advisor in the Ministry of Education Mrs. Christine Springette and Special Advisor to the Premier Mr. Llewellyn Parris, to warmly welcome the team back to Nevis.

In his congratulatory address, Minister Daniel encouraged the students to “be that unstoppable force in debating” adding that a country’s size should not hinder its people’s ability to perform well. 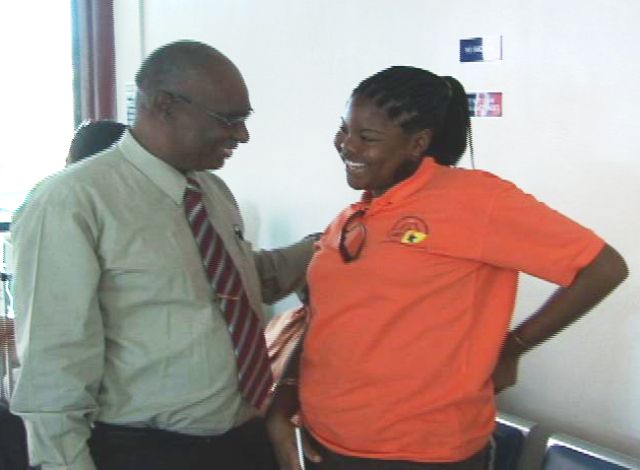 Premier of Nevis and Minister of Education in the Nevis Island Administration the Honourable Joseph Parry speaking with debater Ms. Shaniele Skeete

“I believe the children have picked up the Tempo of the country: performance matters, and they have performed excellently well and they have done us very very proud.

“We are a small country and I trust, this afternoon, that the fact that our students can go abroad and take the trophy and bring it here suggests to us that we must take the psychological limitations of size from our minds and begin to think that we are as good as any and as this competition has shown, we are better than many,” Minister Daniel said.

The youth minister also pledged the NIA’s continued support of the Charlestown Secondary School and the Nevis Sixth Form College and encouraged other organisations, businesses and individuals to do the same.

Prior to the debaters’ departure to Tortola for the annual competition, Minister Daniel, on behalf of the island’s Minister of Housing and Land the Honourable E. Robelto Hector, presented a cheque of EC$5000 to the Nevis Literary and Debating Society.

The cheque, donated by the Nevis Housing and Land Development Corporation, assisted the students with their accommodation costs.

“Our interest in education is not reflected only in the contribution that we give but it’s because we recognise that an investment in education is the highest interest. We also recognise that if we think it is expensive to educate try ignorance so it is in that context that we seek to make sure that all of the units of government have education as the centerpiece,” Minister Daniel said.