Minister of Youth and Community Development in the Nevis Island Administration the Honourable Hensley Daniel.

NIA-CHARLESTOWN, NEVIS (MARCH 4TH, 2011) — “If you follow our working government, you would recognise that the recognition of the young falls in line with our recognition of some older people and what we are seeking to do is to ensure that the young people of the country know and appreciate the efforts being made by young people like themselves.”

Those words, spoken last Friday [Feb. 25] by Minister of Social Development, Youth and Culture in the Nevis Island Administration [NIA] the Honourable Hensley Daniel, recorded the NIA’s commitment towards honouring Nevisians for their “outstanding contribution” to the community.

While the ceremony lauded Ms. Hobson for her contribution towards the enhancement of the performing arts, it also sought to “correct the kind of negative, deficit language associated with the development of young people.”

“What we are doing is recognising the contribution of young people and this is not in any way intended to say to Dianne that she can stop now and retire. This is really putting more fuel in the tank so that she can continue to go forward, upwards and onwards,” Minister Daniel said. 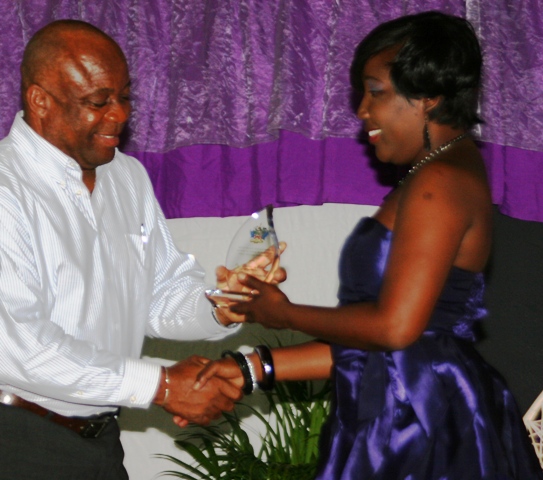 The Honourable Hensley Daniel presents award to Ms. Dianne Hobson for her contribution to the performing arts.

Like the Area Representative for the St. Paul’s Parish, the Honourable E. Robelto Hector, Minister Daniel had been an ardent supporter of Ms. Hobson’s biannual dance productions through the Rhythmz Dance Theatre.

“Dianne, with her dance group, has demonstrated absolute creativity.

“This award is intended to ensure that for years to come, not just Dianne, but several other dancers in her group would have taken over and presented the lead role. We have good examples with us across the region. We have the National Dance Theatre Company in Jamaica and this is our national dance theatre: the Rhythmz Dance Theatre and we want to make sure that it stays alive and well,” Minister Daniel explained.

The culture minister also pledged the NCDF’s support of Ms. Hobson who is the Artistic Manager there.

“When we got to government we sought to harmonise Culturama and the Department of Culture with the establishment of the Nevis Cultural Development Foundation and we put four units in the foundation: administration, research and documentation, festivals and artistic development. Dianne is in charge of the Artistic Development Unit and the intention is because she’s so creative with so many things we think that she can give that unit the kind of direction that we need,” Minister Daniel explained.

Ms. Hobson was the second young person to be honoured, this year, by the Department of Social Development to mark the International Year of Youth.